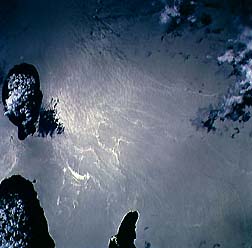 Hibok-hibok (also called Catarman) is a stratovolcano and makes the island of Camiguin (left center of photo), about 12 miles (20 km) north of Mindanao. The summit is covered with loose ejecta and four small craters are nearby. Sulfur was mined at one of the craters prior to 1948. The other craters contain lakes. Mt. Vulcan is a lava dome formed during the 1871-1875 eruption. 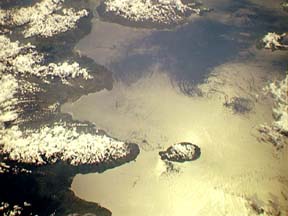 The volcano has four historic eruptions: 1827, 1862, 1871-1875, and 1948-1953. The last two eruptions have been from vents on the flank of the volcano and both caused fatalities. In 1871, most of the local residents fled the area after earthquakes that preceded the eruption. The number of deaths was thought to be small. In 1861, 326 deaths were caused by ashflows that reached the sea. Some people drowned while trying to flee in boats. The 1948-1953 eruption also produced lava flows and a dome.