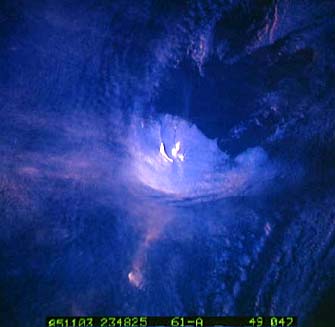 Heard is an active stratovolcano in the south Indian Ocean. Heard has erupted at least eight times since 1910. All known eruptions are from a vent called Mawson Peak, named for Australia's famous Antarctic explorer. Many of the eruptions are subglacial. Most eruptions are moderate in size (VEI=2) and explosive. Only three historic eruptions have produced lava flows. This Shuttle photo (STS61A-0049-0047) looks west and was taken on November 3, 1985. A faint brown eruption plume extends to the east above the lower level clouds. The 1985 eruption began in January and continued to January 1987. The most recent eruption of Heard was in 1993.