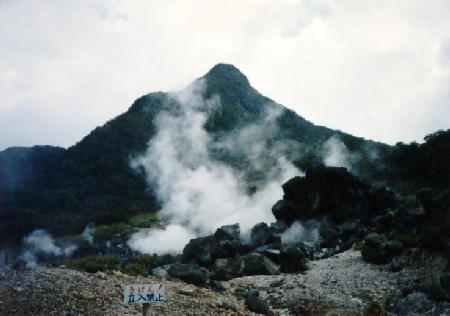 Hakone consists of seven central cones within double calderas. One of those cones is a stratovolcano and six are steep lava domes. The outer, older caldera was formed in the middle of a stratovolcano. The inner, younger caldera was formed in the middle of a shield volcano. The main part of the body of Hakone is a huge stratovolcano. This volcano has a central caldera 6.8 miles (11 km) across from north to south and 6.2 miles (10 km) across from east to west. The circular ridge surrounding this caldera is an old somma. It ranges in height from ~2600-4000 ft (800-1200 m). 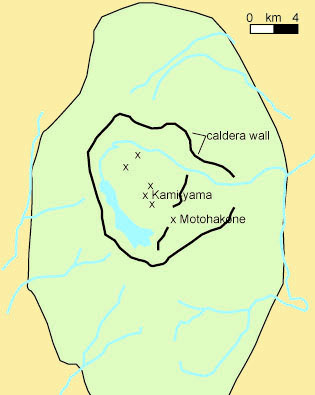 Simple map of Hakone volcano. Xs indicate the summits of the central cones. From Kuno (1962).

The eastern rim of the inner caldera rises to the top of the table shaped mountains. It is called the young somma. The seven central cones stand within the second caldera. They are arranged on a NW-SE line. Kami-yama is the highest peak in the area. It is a stratovolcano.

There have been two eruptions of Hakone in historic times. These eruptions took place in three separate stages. These stages were separated by caldera formation and erosoion. The first stage ended with the sinking of the center of the main cone to form a huge caldera. The second stage had an eruption followed by a collapse of the western part of the cone. This formed the second caldera, which overlapped much of the first one. The third stage began with a violent explosive eruption. Seven central cones then rose up through vents. At the end of this stage, a steam explosion blew off the northwestern part of the mountain. The debris from this event was carried down as an avalanche toward the northwestern foot of the volcano. This blocked the drainage of the caldera, resulting in Lake Asi.