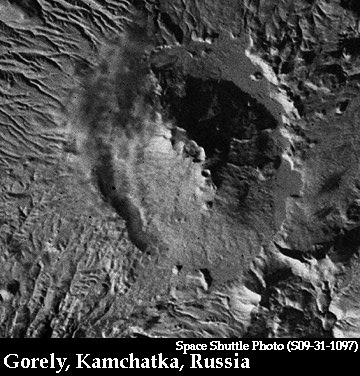 Gorely is a very active caldera volcano with some of its latest eruptions in1980 -81 and 1984-86. Most of these eruptions have been observed in Petropavlovsk, Kamchatka which is 150 km away. GorleyUs caldera is elliptical and is about 10 x 13 km with a shield cone at its center. This volcano, also known as Gorely Khrebet, is structurally similar to IcelandUs Hekla volcano.

Three big craters are located at its summit, one of which is filled by a lake. Gorely is the result of several merged cones that became streached in a lateral direction this also resulting in their summit craters being placed in a line. Lava has flooded large areas of the bottom of Gorley's caldera, one flow descending northwest from the mountain stretched for 9 km. Some other volcanoes in this local area are: Mutnovsky, Asacha, and Opala.

Sources of Information:
Erlich, Edward 1986 Geology of Calderas of Kamchatka and Kurile Islands with Comparison to Calderas of Japan and the Aleutians, Alaska Open-File Report 86-291, US Dept. of the Interior- Geological Survey, p106-8.