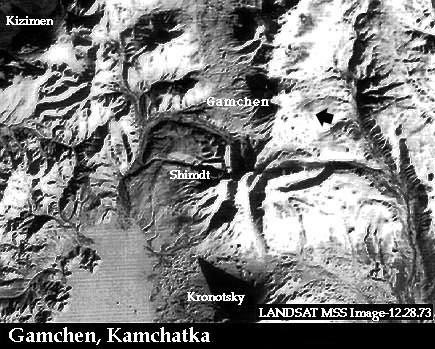 Gamchen is a nested volcano. This means it is found in the caldera of an even older volcano. It rises 4920 ft (1500 m) from its base. It consists of two connected old volcanic cones and a young and active cone. The active cone is located on the southern slope of the old southern cone. The old northern cone has a preserved but extinct summit crater. The youngest cone rises about 2000 ft (600 m) above its surroundings. It is composed of scoria and lapilli. A fresh crater is located on its summit. This volcano is found on the main set of fractures on the east coast of Kamchatka. The fractures run from the northeast to the southwest.

The north and south cones of Gamchen are stratovolcanos. The southern cone is composed of basalts. The northern cone is made of andesites. Extrusive domes lie on the south and north slopes of the main vent of the active cone. They are also made of basalts and andesite basalts.

The crater on the summit of the active cone is shaped like a closed bowl with a diameter of about 1475 ft (450 m). It has a depth of about 650 ft (200 m). The steep walls of the crater are built of basalt and tuff layers. The crater floor is covered with sediments. Weak fumaroles with a temperature from 104-176 degrees F (40-80 degrees C) are found in the south and west parts of the crater.

On the summit of the north cone, the closed crater has a diameter of about 650 ft (200 m). It is about 260 ft (80 m) deep. A glacier sits on the floor of this crater. Basalt and andesite basalt make up lavas from this volcano. Scoria and lapilli compose the pyroclasts.