Volcán Fuego, one of Central America's most active volcanoes, is one of three large stratovolcanoes overlooking Guatemala's former capital, Antigua. The scarp of an older edifice, Meseta, lies between 3763-m-high Fuego and its twin volcano to the north, Acatenango. Collapse of the ancestral Meseta volcano about 8500 years ago produced the massive Escuintla debris-avalanche deposit, which extends about 50 km onto the Pacific coastal plain. Growth of the modern Fuego volcano followed, continuing the southward migration of volcanism that began at Acatenango. In contrast to the mostly andesitic Acatenango volcano, eruptions at Fuego have become more mafic with time, and most historical activity has produced basaltic rocks. Frequent vigorous historical eruptions have been recorded at Fuego since the onset of the Spanish era in 1524, and have produced major ashfalls, along with occasional pyroclastic flows and lava flows.

Simplified tectonic map. Subduction of the Cocos Plate beneath the Caribbean Plate produces the Central American arc.  The arc is defined by the line of volcanoes (black triangles). Modified from Duffield and others (1989). 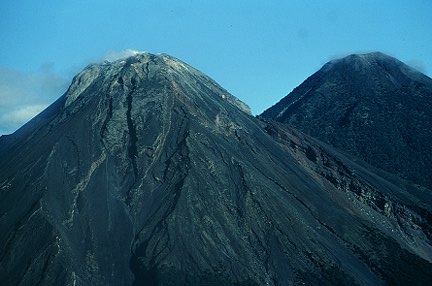 Fuego has erupted more than 60 times since 1524, making it Central America's historically most active volcano. Three of these eruptions caused fatalities. Typically, violent vulcanian eruptions last a few hours to several days and produce pyroclastic flows. This photo shows Fuego (foreground) and Acatenango (background). The most recent large eruptions at Fuego were in October of 1974. Over a ten day period there were four distinct pulses in vulcanian activity, each lasting 4-17 hours. An ash cloud shot more than 4 miles (7 km) above the volcano. Glowing avalanches mov ed down the slopes of Fuego at 35 miles per hour (60 km/hr). Atmospheric effects were reported for months following the eruption.   There are active fumaroles in the crater at the summit.