Lava domes demonstrate a large variety of textures and features, depending largely on composition and the ability of the lava dome to deform and flow. Listed below are a few of these features and breid descriptions of each.

Lava domes are often seemingly just a pile of loose and sharp blocks divided by large cracks and spaces between the blocks. Indeed, due to the composition of the lavas that form the domes (typically viscous and high in silica), the lava tends to form and cool into large blocks, varying in size from less than a centimeter to well over 5m. And although blocks may appear randomly placed, their distribution probably reflects eruption dynamics (Fink and Anderson, 2000). These blocks are often unstable and form a field of talus surrounding the lava dome. 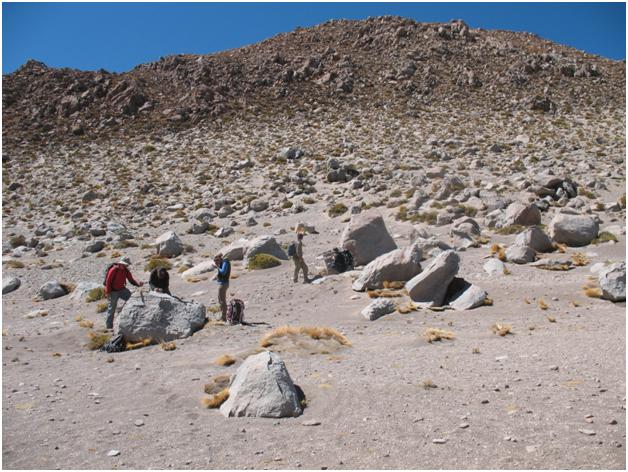 Large lava blocks near the edge of Chillahuita lava dome in the Andes.

Ogives are commonly found on lava flows, and often resemble the pahoehoe ropes sometimes seen on basaltic lava. These ridges can also be found on some lava domes known as coulées, sometimes found to as much as 30m high. The ridges are formed as a result of compressional forces, parallel to flow of the coulée. The outer surface of the coulée must have a viscosity that is higher than the interior but also must be able to deform in a ductile manner. The spacing and height of these features depends largely on composition. 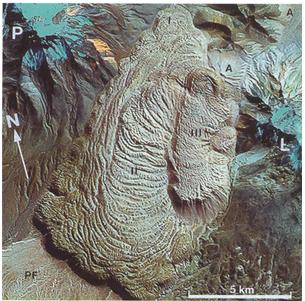 Chao, as seen in this satellite image, is an excellent example of a coulée. Note the large pressure ridges visible on the surface of the lava. The ridges on Chao can be over 30m high.

Another common feature seen on lava domes and flows are crease structures. These features develop where lava is allowed to spread laterally as the outer part of the lava flow cools and lava from the interior is still plastic. The processes of creating larger cracks often occurs in multiple episodes of cooling and subsequent fracturing. Often, new extrusions of lava will emerge from these cracks. Size of the cracks can vary from less than a meter to almost 250m (Fink and Anderson, 2000) 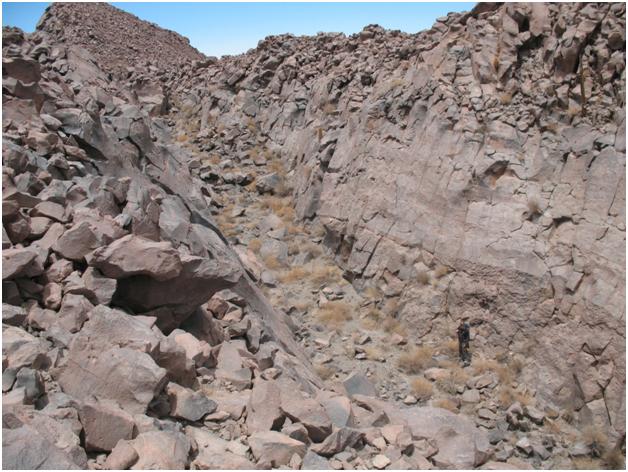 This picture is of a large crease structure found in a lava flow in the Andes.