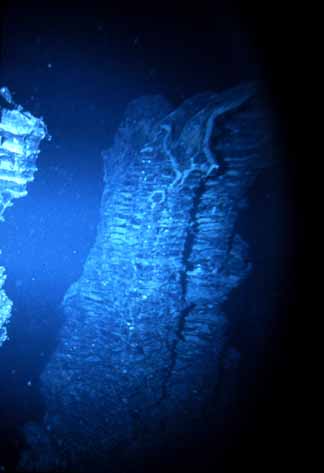 Conditions during submarine eruptions are very different from eruptions on land. Water quickly quenches lava, turning the outer surface of flows to glass. The weight of the overlying water can make the pressure 250 times greater than atmospheric pressure. This pressure is so great that bubbles have great difficulty in forming and growing in magma and lava. Volcanologists are currently debating if explosive submarine eruption are even possible in deep ocean basins. The following photos show the most common volcanic features and deposits associated with submarine volcanoes. This handheld photograph was taken by Bob Embley of NOAA/OSU and shows lava "spires" near the summit of northern Juan de Fuca Ridge. The spires are probably formed when superheated water trapped beneath active flow forces channel to surface, creating pipe of rapidly quenched glass. Horizontal shelves on side of spires form as inflated lava recedes and drains away. 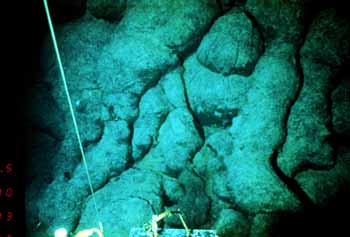 Lava erupted underwater forms pillows. They are shaped much like toothpaste squeezed a short distance out of the tube. They form in much the same way. The crust on the molten interior of a flow splits and the lava oozes out, flows a short distance, and then solidifies. The process repeats to create thick stacks of pillows. The bulbous shape of pillows is very different from pahoehoe, aa, or blocky lava flows found on land. Pillows can form in the ocean, lake, or rivers. Just add water. This photo shows pillow tubes flowing down side of volcanic cone in summit caldera of Axial Volcano. The photo was taken by Bob Embley with a handheld camera from the research submersible Alvin. 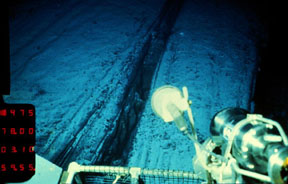 Sheet/corrugated lava surface in the floor of the axial trough of the East Pacific Rise crest near 9 degrees 31'N, depth 8,455 feet (2,578m). White sediment is residue of barite mud used by Ocean Drilling Project when they drilled this site in 1994 on Leg 142. Crack in middle of photo is ~16 inches (40 cm) wide and is a cooling crack developed in the flow which is estimated to be 9-12 feet (3-4 m) thick. Photography courtesy of Woods Hole Oceanographic Institution and members of the Adventure dive (Principle Investigators: D. Fornari, R. Haymon, K. Von Damm, M. Perfit, M. Lilley, and R. Lutz). 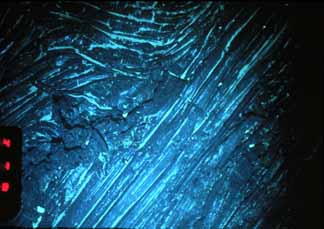 Tumuli and sheet flows have recently been found in submarine lava flow fields. Tumuli form as the interior of the flow inflates. The presence of tumuli and long sinuous ridges on submarine lava flow fields suggests that lava tubes help distribute the lava. The presence of inflation features, like tumuli, on the surface of lava flows indicates lava tubes play a role in generating submarine lava fields (Appelgate and Embley, 1992). Tubes help lava travel tens of kilometers from their vents. This photo shows young sheet flow lava on the Cleft segment of Juan de Fuca Ridge. Photo is from a towed camera system and courtesy of NOAA. 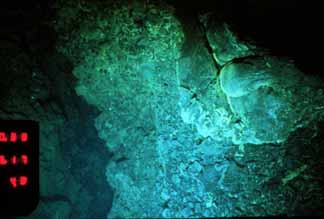 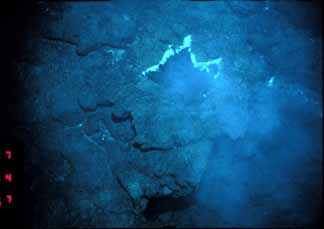 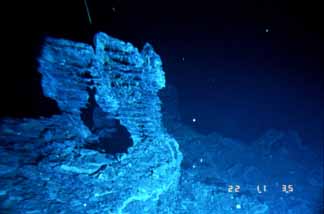 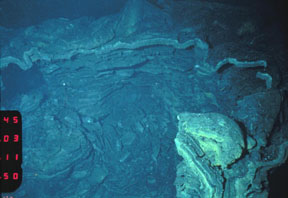 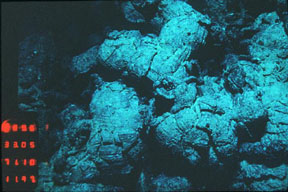 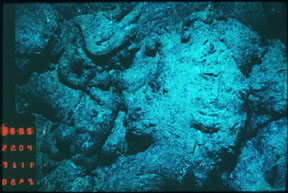 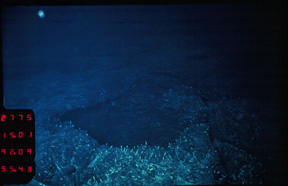 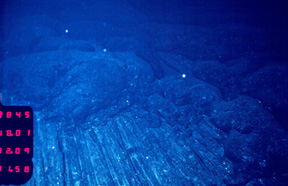 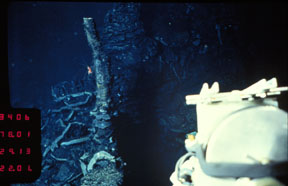 of the axial summit collapse trough of the East Pacific Rise near 9 degrees 50.1'N, 2524 m depth.