Computer-generated topographic map of the east Pacific Rise near 9 degrees north. Blues and greens represent lower elevations. Yellows and reds represent higher elevations. The narrow axis (red linear features) and narrow or absent axial rift, characteristics of fast-spreading mid-ocean ridges, are obvious. The spreading centers overlap near the middle of the image. The cones in the top-right corner of the image are a linear chain of near-axis seamounts on the Pacific Plate. The seamounts are greater than 200 m tall. The Clipperton transform fault offsets the ridge at the top of the image. View is to the north. Compare with map below. Image courtesy of Stacey Tighe, University of Rhode Island. Image from U.S. Geological Survey's This Dynamic Earth. 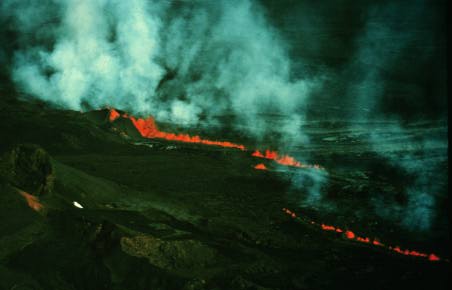 In contrast with slow spreading mid-ocean-ridges, where hundreds of seamounts form in the rift along the crest or the ridge, volcanism at fast spreading mid-ocean-ridges is much like the subaerial fissure erupts associated with volcanic rift zones. This photo shows a curtain of fire during an eruption of Mauna Loa in Hawaii. Photo by Robin Holcomb, U.S. Geological Survey's Hawaiian Volcano Observatory, July 5, 1975.

Left:   This map shows segments of the East Pacific Rise near the Clipperton Transform. The thick black lines show the location of the spreading axes along the rise. The thick red lines indicate portions of the rises where the presence of an axial magma chamber has been inferred. Stars show the location of active hydrothermal vent areas. Compare to the computer-generated topographic map at the top of this page. Modified from Macdonald and Fox (1988).

Magma chambers extend tens of kilometers along the axes of fast spreading mid-ocean-ridges. These magma chambers feed the fissure eruptions. Some magma chambers are only little more than half a mile (one kilometer) beneath the seafloor. This cross-section of the oceanic crust along the northern East Pacific Rise is based on a model proposed by Sinton and Detrick (1992) and modified by Perfit and others (1994). The cross-section is 5 miles (8 km) across and 3 miles (5 km) deep.

The 'Moho' marks the base of the crust and the top of the mantle. ASC is the Axial Summit Caldera. 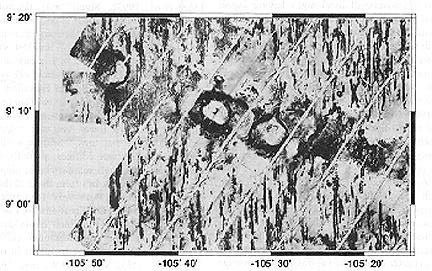 In addition to fissure eruptions, another style of volcanism occurs at fast-spreading mid-ocean ridges. Central-vent eruptions away from the axis of the spreading center form near-axis seamounts (Scheirer and Macdonald, 1995). These volcanoes range in height from 150-7,500 feet (50-2500 m). Small seamounts are much more common than large ones with the characteristic height of seamounts in the Pacific ranging from 180-900 feet (60-300 m). The summits of the volcanoes can be flat or include craters. The flanks of the volcanoes have gentle slopes between 5 and 25 degrees. This image is constructed from side scan data and shows the P9 degrees 05 seamount chain. Image courtesy of Ken Macdonald (see Journal of Geophysical Research, v. 100, no. B2, p. 2239-2259).