Please tell me about Nyiragongo and nephelinite 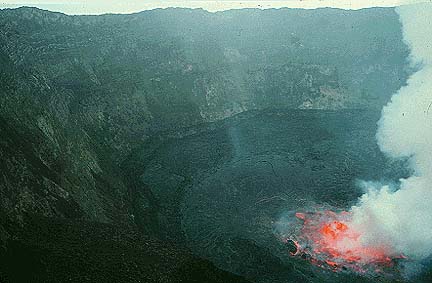 Nyiragongo (elevation: 11,365 feet, 3,465 m) is a stratovolcano. A crater at the summit of Nyiragongo contained a lava lake from 1894 to 1977. On January 10, 1977, the lava lake drained in less than one hour. The lava erupted from fissures on the flank of the volcano and moved at speeds up to 40 miles per hour (60 km/hr). About 70 people were killed. The fluid lava reached within 2,000 feet (600 m) of the Goma airport. From June 1982 to early 1982 the volcano was active with a lava lake in the crater and phreatic explosions and lava fountaining.

The most recent activity at Nyiragongo began in June of 1994. A lava lake once again filled part of the crater. The lava lake was approximately 130 feet (40 m) in diameter and sent lava flows onto the floor of the 2,600 foot (800 m) diameter crater. The surface of the lava lake was about 500 feet (150 m) below the level of the lake when it drained in 1977.

The lava at Nyiragongo is a nephelinite. Nephelinite is a type of alkaline (high concentration of alkali elements, Na and K) lava. It tends to be aphanitic (no crystals visible to the unaided eye). With a microscope crystals of the following minerals might be seen: nepheline, clinopyroxene, olivine, iron-titanium oxides, feldspar and possibly leucite.