How high can explosive eruptions go and how far can the debris and ash be spread? 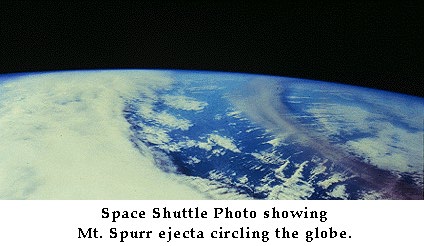 Well, that depends on how big the eruption is and how big the debris is that you are concerned about. As you might imagine a big eruption will send material farther. Additionally, the big material from any eruption doesn't get thrown as far as the finer stuff.

Volcanologists go out into the field to figure out the distribution of erupted pyroclastic material. They will go to numerous sites around the volcano and measure (in general) 3 things: 1) the total thickness of the pyroclastic deposit at each location; 2) the average size of the 10 largest pumice at each location; and 3) the average of the 10 largest lithic clasts at each location (a lithic is a pre-existing rock that is blown apart in the explosive eruption). They then draw contours around the data that they have collected. In some cases, if the geologists are studying a very old eruption, they may not even know where the vent was. The contours of the thickness and size measurements should close around the vent so that its location can be determined. Data from a very extensive study of the AD 79 Vesuvius eruption by Haroldur Sigurdsson shows that for each of two particularly strong blasts during the eruption, the pumice layer was 100 cm thick up to ~20 km downwind, 50 cm thick out to about 50 km, 25 cm thick out at ~60 km, and so on. Pumice 15 cm in diameter made it out ~6 km downwind, 10-cm pumice made it ~7 km, and 5-cm pumice even further.

The finest dust often gets carried hundreds or even thousands of km downwind.

Here are some highlights very fine book about the 1883 Krakatau eruption by Tom Simkin and Richard Fiske (Simkin, T., and Fiske, R.S., Krakatau 1883: The volcanic eruption and its effects: Smithsonian Institution Press: Washington, D.C., 464 p.) that should give you and idea about how far ash can travel during a large eruption.