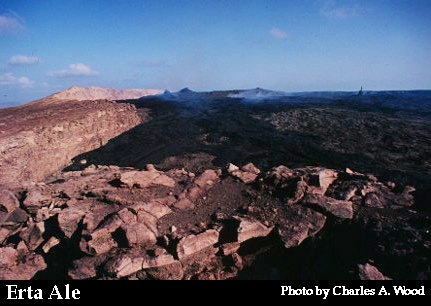 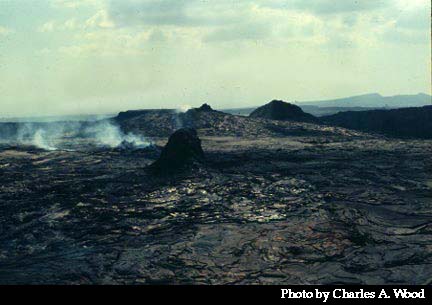 Erta Ale is a shield volcano in the Afar region of East Africa. Erta Ale is a remote and rarely visited volcano that is known currently to have an active lava lake in its summit crater.

Two new studies on Erta Ale have recently been published. Oppenheimer and Francis (1998) looked at the implications of long-lived lava lakes. They believe that Erta Ale's lava lake has been active for at least the last 90 years (making it one of the longest known historic eruptions). Large amounts of heat are released by the volcano but the amount of lava that erupts is relatively small. Oppenheimer and Francis speculated that a higher magma density (caused by the cooling of the lava in the lake) inhibits eruptions. They proposed that most of the magma accumulates in the underlying crust in the form of dikes and sills. Since the Afar region is under extension, conditions are favorable for the injection of dikes and sills.

Barrat and others (1998) looked at the chemistry of the rocks at Erta Ale. Rocks range in composition from basalt to rhyolite. Barrat and others found that two mantle sources were tapped for the basalts: one similar in composition to the source for mid-ocean ridge basalts (called MORB by geochemists) and one similar in composition to the source for ocean-island basalts (called OIB). Their data did not show a significant contribution of sialic material from the continental crust. The silica-rich volcanics are derived from fractional crystallization of basaltic magmas.