Mount Erebus from across McMurdo Sound. Photograph by Rick Moscati, 1990. The Antarctica plate is mostly asesmic and moves little relative to other plates. About 95% of the edge of the plate is a divergent (spreading) plate boundary. Antarctic volcanoes are located along the margins of large rift systems. These rifts total 1,900 miles (3,200 km) in length, comparable to the East African Rift. Mount Erebus (elevation: 12,444 feet, 3,794 m) is on Ross Island in the Ross Sea. Erebus is an active volcano with a convecting lava lake within a summit crater. It has been continuously active since 1972. Most eruptions are small and Strombolian in character, tossing bombs onto the crater rim. The volcano is less than one million years old.

Mount Erebus.Photograph by Rick Moscati, 1990. The lava within the lava lake is alkalic in composition. Specifically, it is called anorthoclase phonolite. Anorthoclase is a feldspar mineral. Phonolite refers to rocks made of the minerals alkali feldspar and nepheline. Alkalic lava is common in rift volcanoes.

Mount Erebus from across Ross Island. Photograph by Rick Moscati, 1990. 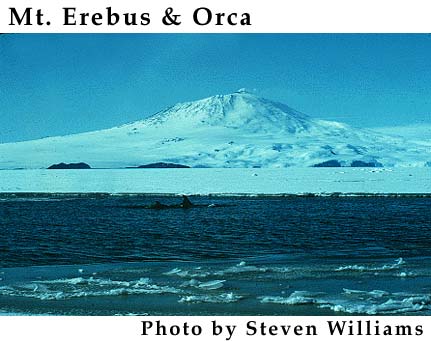