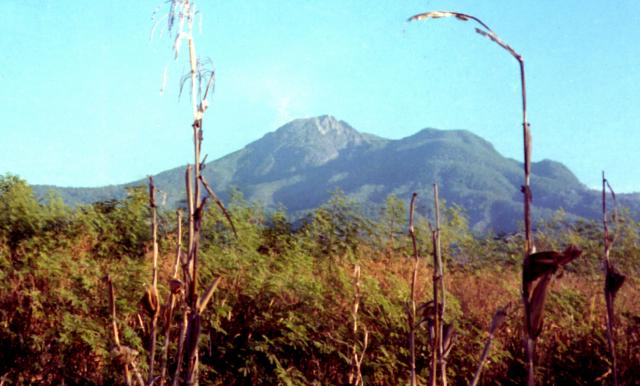 A lava dome (center) forms the 1671-m-high summit of Egon volcano. Gunung Egon sits astride the narrow waist of eastern Flores Island, and its lower flanks extend nearly to both the Flores Sea on the north and the Savu Sea to the south. The unvegetated summit has a 350-m-wide, 200-m-deep crater that sometimes contains a lake. Other small crater lakes occur on the flanks of the 1703-m-high volcano. Photo by Volcanological Survey of Indonesia.

The barren, sparsely vegetated summit region has a 350-m-wide, 200-m-deep crater that sometimes contains a lake. Other small crater lakes occur on the flanks of the 1703-m-high volcano. A lava dome forms the southern 1671-m-high summit. Solfataric activity occurs on the crater wall and rim and on the upper southern flank

Reports of historical eruptive activity prior to explosive eruptions in 2004 were inconclusive. A column of "smoke" was often observed above the summit during 1888-1891 and in 1892. Strong "smoke" emission in 1907 reported by Sapper (1917) was considered by the Catalog of Active Volcanoes of the World (Neumann van Padang, 1951) to be an historical eruption, but Kemmerling (1929) noted that this was likely confused with an eruption on the same date and time from Lewotobi Lakilaki volcano. (description courtesy of the USGS)

Egon volcano. A lake occupies the floor of the crater in this 1920 view.

The northern crater rim marks the 1.703 m high summit of the volcano.