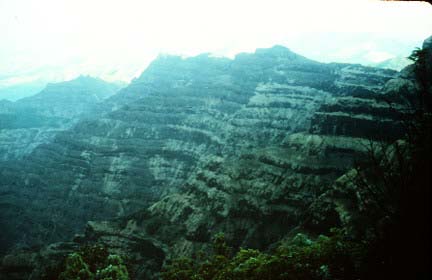 The Deccan Traps are one of the largest volcanic provinces in the world. It consists of a composite thickness of more than 6,500 feet (>2,000 m) of flat-lying basalt lava flows and covers an area of nearly 200,000 square miles (500,000 square km) (roughly the size of the states of Washington and Oregon combined) in west-central India. Estimates of the original area covered by the lava flows are as high as 600,000 square miles (1.5 million square km). The volume of basalt is estimated to be 122,750 cubic miles (512,000 cubic km)(the 1980 eruption of Mount St. Helens produced 1 cubic km of volcanic material). The Deccan Traps are flood basalts similar to the Columbia River basalts of the northwestern United States. This photo shows a thick stack of basalt lava flows north of Mahabaleshwar. Photograph by Lazlo Keszthelyi, January 28, 1996. 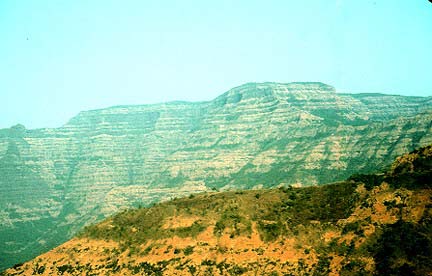 The Deccan basalts may have played a role in the extinction of the dinosaurs. Most of the basalt was erupted between 65 and 60 million years ago. Gases released by the eruption may have changed the global climate and lead to the demise of the dinosaurs 65 million years ago. This photo shows the Deccan Tarps between Mambai and Mahabaleshwar. Photograph by Lazlo Keszthelyi, January 27, 1996. 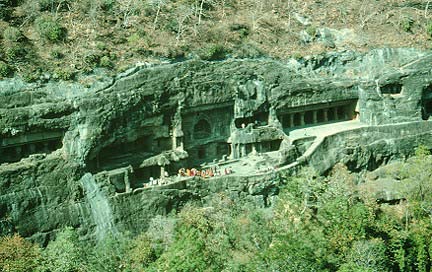 Vocanologists are also trying to understand how such great volumes of lava are erupted. Early models proposed that lava flooded across large areas at extremely rapid rates. Recently proposed models suggested that at least some of the flows are emplaced at gradual rates, lasting months to years. This photo shows the Ajunta Caves, temples carved into the basalts. Note the school group for scale. Photograph by Lazlo Keszthelyi, January 31, 1996. 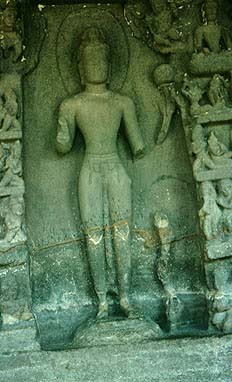 The Ajunta Caves were carved over four centuries beginning in 200 BC. More construction was done in the 6th and 7th centuries. The "caves" contain important examples of Buddhist architecture and sculpture. A contact between two lava flows passes through the knees of this statue. Photograph by Lazlo Keszthelyi, January 31, 1996. 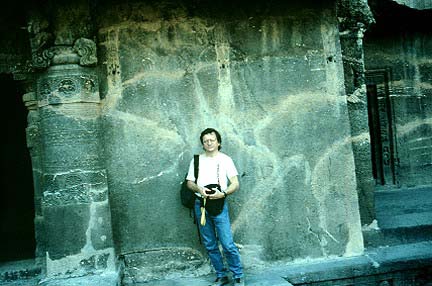 Flow lobes exposed in a wall of the Ajunta temple.

Small features such as these suggest that slow emplacement of flows during eruptions lasting months or years.

Geologists have postulated that the Deccan Trap volcanism is associated with a deep mantle plume or hot spot. The plume or hot spot caused the continent to break apart. India has drifted north, away from the hot spot which is now under Reunion.