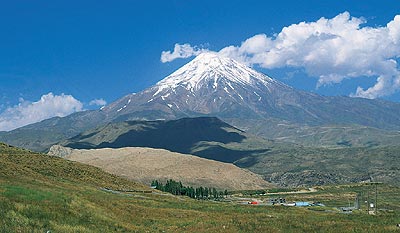 The 5670-m-high stratovolcano is the highest volcano in the Middle East and was constructed above the southern rim of a 9-km-wide caldera.

The Location of Mount Damavand
Courtesy of MSN Encarta

The well-preserved summit crater of the trachyandesite-to-trachytic volcano contains a small lake, and young lava flows from summit and flank vents cover the western side of the volcano. The earliest lava flows are thought to post-date roughly 38,500 year old terraces. The absence of Pleistocene glacial erosion suggests that the main stage of edifice construction occurred during the Holocene (Catalog of Active Volcanoes of the World). No historical eruptions are known, but hot springs are located on the volcano's flanks, and fumaroles are found at the summit crater. (Description courtesy of the SI/USGS Global Volcanism Program) 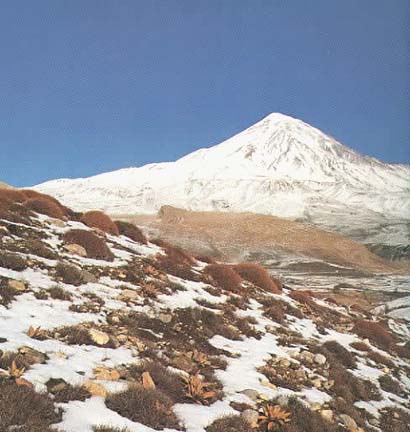 The natural beauty of Mt. Damavand
Photo by Mohammad Sade1i Fasai, Thanks to Elaheh Siadatpour and The Iranian.com

First climbed W.T Thomson, 1837.    The seasoned traveler in Iran becomes so used to seeing gaunt, rugged terrain, jagged peaks and bare deserts, that the sight of Damavand is a relief and surprise to the eye. Visible from many kilometers away, thought it is surrounded on every side by the peaks and ridges of the albroz, its superior height and singular outline compel attention. It is not surprising that such a prominent mountain should figure in the national epic of Iran. 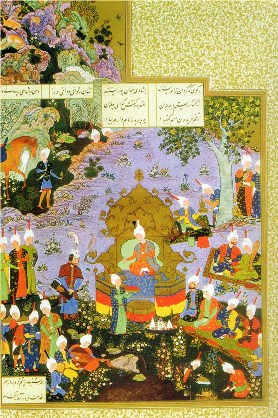 An image from the Iranian Epic of Shahnama
Photo courtesy of Answers.com. For more information on Shahnama, click HERE

Written around 1000AD, the great Iranian poet, Ferdowsi Tousi, relates in his epic “Shahnama” how the tyrant Zohak is overthrown by the young Feridun and imprisoned in chains to die in a cavern on the slops of Damavand. Local legend asserts that his groans may still be heard on this slopes.