Craters of the Moon

Craters of the Moon is a large lava flow field with cinder cones, spatter cones, lava tubes, volcanic bombs and tree molds. It is located along the north border of the Snake River Plain in Idaho. It was declared a national monument by President Calvin Coolidge in 1924. The monument contains 55 cones with lava flows and 14 fissures, many of which have spatter cones. Many of the cinder cones are higher on one side due to strong winds during their eruptions. The Great Rift is a line of cones and lava vents that runs for 13 miles (21 km) through the monument. Fissures from this rift are the vents for the youngest lavas in the area. The youngest Craters of the Moon lavas are approximately 1500 to 2000 years old. These lavas are basaltic. 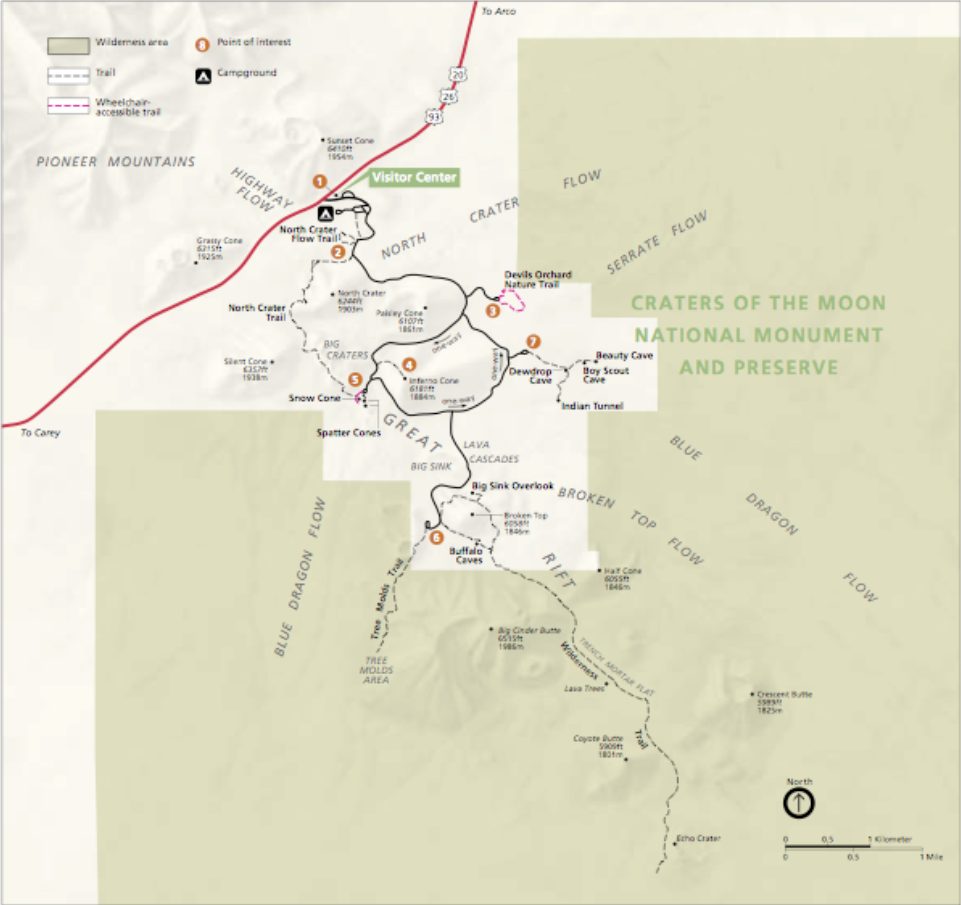 Map of Craters of the Moon National Monument and Preserve. (National Park Service)

One early traveler to the area that is now Craters of the Moon National Park and Preserve (CRMO) dubbed it "The strangest 75 square miles on the North American
continent". The park is home to three basaltic lava fields: Craters of the Moon lava field, Kings Bowl lava field, and Wapi lava field. All of these lava fields were formed during eruptions from the Great Rift, a zone of parallel fissures that is 62 miles long! The eruptions began about 15,000 years ago. The last eruption was about 2,000 years ago, but the volcanoes may still be active today (Kuntz and others, 1986b). 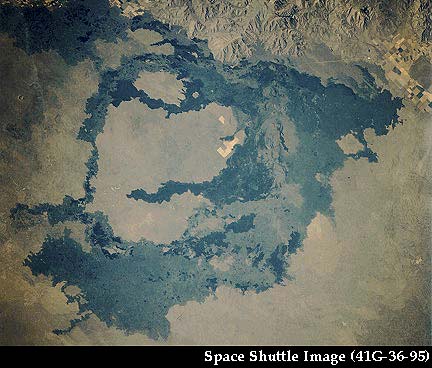 Craters of the Moon lava field (1,600 km2) provides the most spectacular display of basaltic volcanism in the contemporaneous United States (Kuntz and others, 1987). It is the northernmost lava fiend in the park that formed from several eruptions (polygenetic). There are at least 60 lava flows, 25 cinder cones, and eight eruptive fissures documented in the field.

The Kings Bowl lava field (3.3 km2) is the central lava field in the park. It contains an interesting set of volcanic landforms including explosion pits, lava lakes, and a tephra blanket.

The Wapi lava field (326 km2) is a shield volcano that formed from a single eruption (monogenetic). It is characteristic of the low, broad shield volcanoes common
on the eastern Snake River Plain. Even though it is a volcano, the Wapi lava field is very flat; it has slopes of 1 degree or less over tens of kilometers. Pahoehoe lava is common the Wapi field and interactions between different flows make up some of the unique surface textures seen in the field. 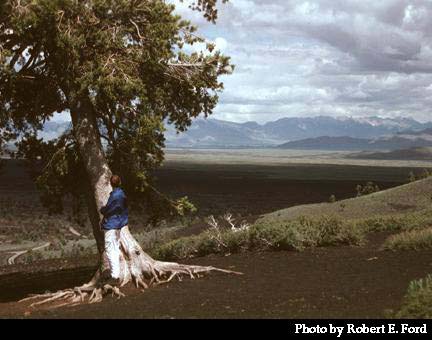 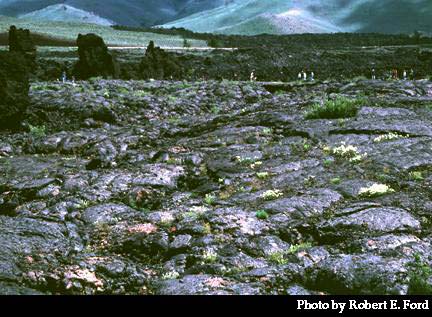 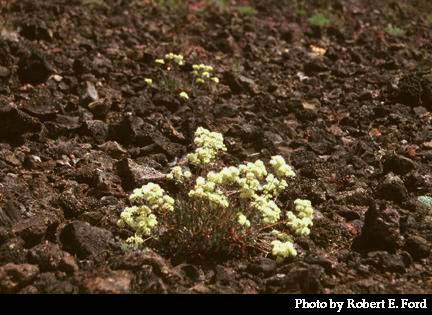 Volcanic features at CRMO are the result of two different regionally extensive processes. The immediate area (where the visitor’s center is located) is part of the Eastern Snake River Plain on the track of the Yellowstone hotspot (Fig. 9). This region contains both old and young deposits. The larger regional area is part of the Basin and Range Province, a continental rift zone containing young volcanic deposits.

A hotspot is thermally expanded buoyant mantle (bigger hot mantle that floats), which lifts an overlying plate. As hotspot material rises, the pressure drops so the hotspot begins to melt producing magma. It is unclear at what depth the Yellowstone hotspot originated. Some scientists argue for an origin in the lower mantle (closer to the center of the Earth), similar to the plumes postulated to have formed the Hawaiian Islands (i.e. Pierce and others, 2002) while others argue for an origin in the upper mantle as a result of a tectonic reorganization (i.e. Christiansen and others, 2002, Atwater, 1970). Timing of the impact of the plume on the upper crust near the border between Oregon and Nevada is generally agreed to be about 16 million years ago (Pierce and others, 2002 and Christiansen and others, 2002).

Hotspots can be used to track the motion of tectonic plates. As the North American Plate moves, the hotspot stays stationary, resulting in a distinctive pattern of volcanism that can be traced through John Day Fossil Beds National Monument, CRMO, and Yellowstone National Park (Fig. 10). Partially melted mantle at the hotspot produces a dark, runny, basaltic magma at the start. As the basalt melts its way toward the surface of the Earth it becomes enriched in silica and produces light, sticky, rhyolite magma. As the plate continues to move over the hotspot, the channels to the surface become better established and magma becomes more depleted in silica. As a result, basaltic magma can once again make its way to the surface and covers the rhyolitic features.

The progression of hotspot volanism can be seen along the Snake River Plain.
Craters of the Moon National Monument and Preserve represents the final stage of
Hotspot volcanism, rhyolite lavas covered by basaltic lavas. (Lillie, 2005)

Remnants of the early, silicic phase of volcanism are easily visible in Craters of the Moon National Park and Preserve. They appear as domes along the Axial Volcanic Zone. These domes have rhyolite cores covered by late-stage basaltic lavas. Some of the most visible domes are Big Southern Butte, Middle Butte, Unnamed Butte, and East Butte (Hughes and others, 1999 and McCurry and others, 1999). 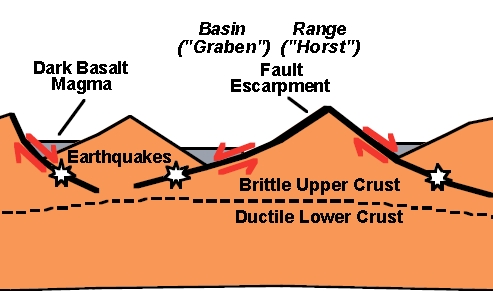 Figure 11: Normal faults form where there is extension occurring.
The brittle upper crust breaks and the upper fault block slides down into the low producing a horst (range) and a graben (basin).
Dark basalt magma erupts near the faults (Modified from Lillie, 2005)

Extension of the Basin and Range produces normal faults where the upper portion of the fault falls down (Fig. 11). Normal faults are expressed topographically as parallel mountain ranges and down-dropped valley floors along the northern margin of the park.  Often the faults act as conduits where basalt magma erupts to the surface in a fissure eruption. The Great Rift at Craters of the Moon National Monument and Preserve is 62 miles long! (Fig. 12) Remnants of fissure eruptions include lava flows, cinder cones, spatter cones, and shield volcanoes. 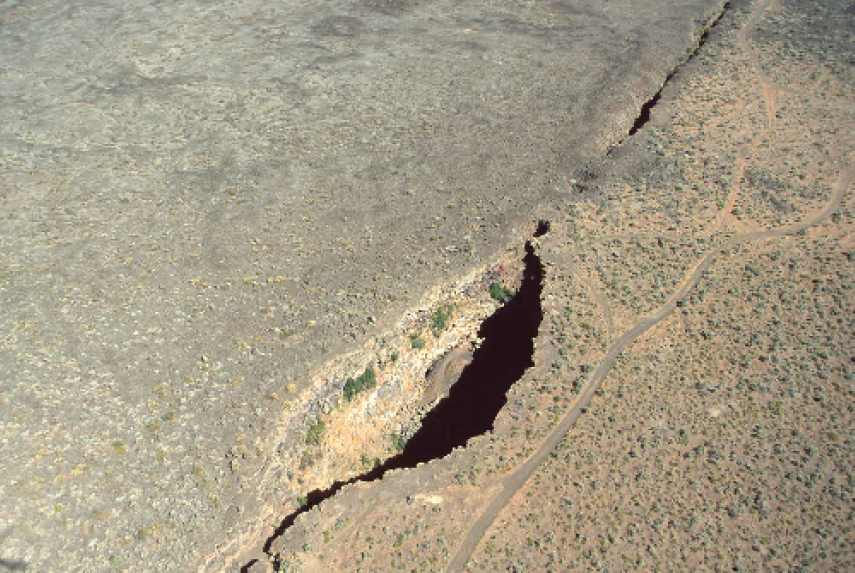 The majority of volcanic features at CRMO are the result of basaltic volcanism along the Great Rift between 15,000 and 2,000 years ago (Kuntz and others, 1986a).  Landforms reflect both the composition and the character of the eruption. Dark, basaltic lavas that contained gas bubbles form the prominent features at Craters of the Moon.  Although many of the landforms are formed from similar lavas, the character of volcanic eruptions along the fissure system was changing over time so the landforms don’t all look the same. (Fig. 13)

Eruptions likely began as lava fountains along the fissures creating a curtain of fire as is seen in Hawaiian volcanoes (Fig. 13a). Early in the eruptive cycle, the fluid
lava contained a lot of gas so it fragmented into small pieces that blanketed the landscape in a thin veneer of ash and tephra. Over time, the eruptions localized into individual vents and the small fragments built cinder cones and spatter cones as the small pieces of cooled lava collected near the vent (Fig. 13b-c). As the lava released its gas, the eruptions became less explosive and a calmer, voluminous flow began. Over time, these calm outpourings of runny basaltic magma formed broad, low shield volcanoes at Craters of the Moon National Monument (Fig. 13d) (Kuntz and others, 1986a).

Lava flows at Craters of the Moon National Monument and Preserve generally fall in one of two categories: pahoehoe, or ropy lava, and aa, or lava with a rough, jagged surface, that result as lava flows and cools. 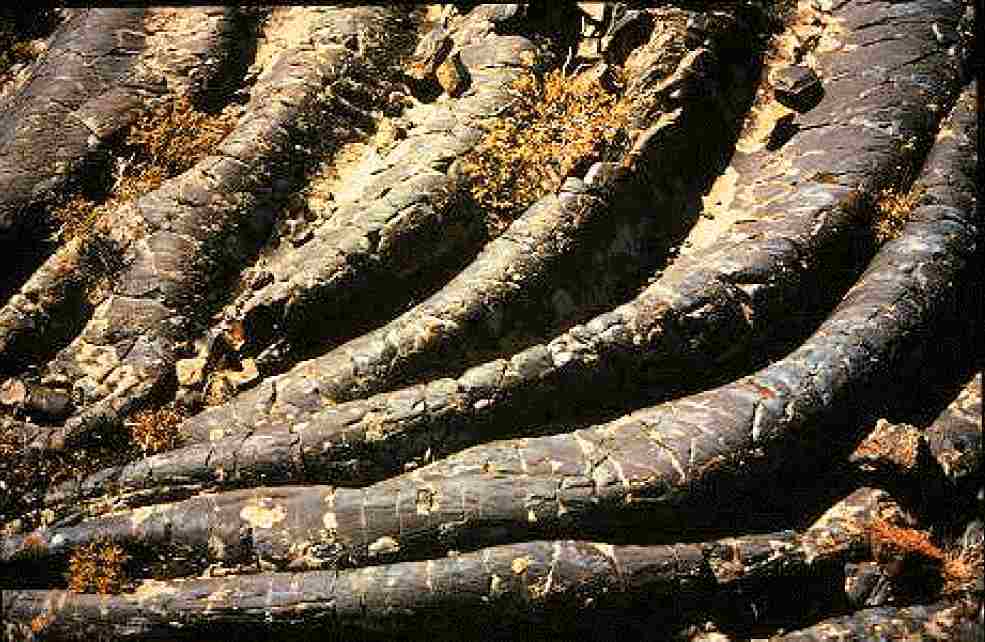 Pahoehoe textures form when lava flows form a thin skin that is pushed into the folds of hotter, faster moving lava below the surface (Fig. 14). It tends to occur when the volumetric flow rate of the lava is low so the flow can “heal” small fractures in the surface skin (Walker, 2002). As the lava cools it thickens and the surface textures change. Slabby pahoehoe is composted of jumbled slabs of broken pahoehoe crust.  Further cooling results in shelly pahoehoe, which forms when gas-rich lavas contain blisters and thin crusts. Further cooling results in a thick pasty lava with spiny pahoehoe surface textures formed from burst gas bubbles.

Pahoehoe textures give way to aa textures as the volumetric flow rate increases.  The transition from Pahoehoe to aa flows occurs when the flow rate is too high for the lava to “heal” the fractures on the surface skin. Aa flows have a thick upper crust of loose clinkery or rubbly debris. Large aa flows record other flow features. They have surface waves up to 10 ft. (3m) in height that record flow direction (Kuntz and others, 1987). (If you’re planning to visit Craters of the Moon NM, aa flows are in remote sections of the park and are not easily accessible by visitors.) Block lava are similar to aa flows, but they have smooth blocks on their surfaces. Examples of block lava flows in at CRMO are the Serrate flow (pictured), Devils Orchard (reachable by trail), and the Highway Flow visible from the saddle between Sunset Cone and Grassy Cone.

Lava flows sometimes form lava caves and lava tubes. When the surface skin gets thick enough, the central portion of the flow is effective insulated. The rigid outer skin and molten inner core allows lava to effectively drain away from the source. When the eruption stops, the tubes empty leaving just the outer crust. Lava tube caves, such as Bear Trap Cave and Indian Cave, are popular attractions at Craters of the Moon National Monument.

During an eruption of gas-rich magma, small blobs of magma are ejected. When the small blobs cool and solidify, they are called cinders. When the cinders fall around the vent, they form a circular or oval cone called a cinder cone. Most cinder cones have a bowl crater at the summit, but some of the cinder cones at Craters of the Moon National monument and Preserve do not, for example Big Cinder Butte. Cinder cones tend to be well preserved because the cinders have a high porosity. This means water drains through them instead of along the surface so surface erosion is minimized.  Cinder cones are some of the most striking features along vent systems that are part the Great Rift volcanic system. About 25 cones preserved (Kuntz and others, 1986).

Many of the cones are nested, reflecting the migration of eruptions down the fissure system. Some cones are aligned with the rift system, for example cones at Big Craters are aligned with the fissure. Other cinder cones along the Great Rift include: Big Cinder Butte, Broken Top, Sunset Cone, Grassy Cone, Silent Cone, Inferno Cone, and Half Cone (Greeley, 1990; Kuntz and others, 1987).  Cinder cones are big piles of loose material so they are easily altered by subsequent volcanic activity. For example, North Crater displays some cinder “monoliths” that appear to be fragments of larger cinder cones that were rafted to their present location (Greeley, 1990).

Spatter and cinders are formed from the same process but the characteristics of the lavas are different. Spatter forms from a lava with less gas, so it has a fluid shape while cinders tend to have more angular boundaries. When spatter collects near the vent, it builds a circular cone. Often these cones are aligned with the regional rift system. Sometimes spatter cones are welded together forming a rigid structure but sometimes they are not welded together and produce an unconsolidated cone similar to a cinder cone. Welded cones commonly have steeper sides because the particles can stick together so they preserve the initial shape of the cone for a longer period of time.

Shield volcanoes are broad, gently sloping volcanic cones that are usually tens or hundreds of square kilometers in extent. They form where large volumes of gas-poor basaltic magma erupted from vents along fissures. As successive eruptions build layers onto the volcano, it gains both area and elevation. Shield volcanoes at Craters of the Moon are common close the Great Rift.