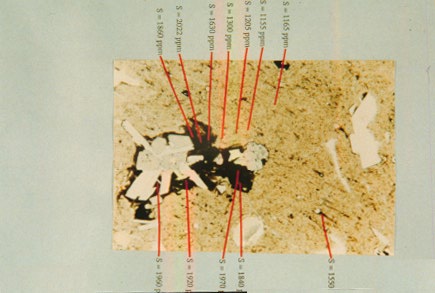 Sulfur concentrations in parts per million (ppm) at several locations in a glassy sample of the Columbia River flood basalt.

Because of the great amounts of gas released by such large volume eruptions, flood basalts have the potential to impact the global climate. Self and others (1997) estimated plume heights of 3-6 km above fire fountains and 8-11 km above fissures. Plumes during some periods of the eruption were higher. Self and others suggested that sulfur dioxide and hydrogen sulfide released during these eruptions formed sulfate aerosols in the upper troposphere and lower stratosphere. 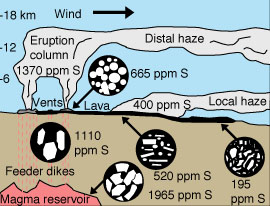 Degassing budget of the Roza eruption.

The amount of sulfur (S) in the magma and released during various stages of volcanic activity are given. From Self and others (1997).

To better constrain the effects of such an eruption Thordarson and Self (1996) determined the sulfur, chlorine, and fluorine concentrations in glassy samples and glass inclusions from samples from the Rosa flow. They found that most of the gas (66%) was released during the eruption (about 9,000 Mt of SO2) and that significant amounts were released as the lava flowed and crystallized (about 2,800 Mt of SO2). Based on their study, the following amounts of gas were released:

These amounts are enormous relative to well studied historic eruptions. For example, the 1991 eruption of Mount Pinatubo produced 20 Mt of SO2, large by historic standards but small compared to flood basalt eruptions. Assuming the Rosa flow was erupted over a 10 year period, Thordarson and Self (1996) estimated that this flood basalt eruption was equivalent to four times the atmospheric impact of the Pinatubo eruption for every month for a decade. Other lava flows in the Columbia River Flood Basalt Province have even greater volumes (and other large igneous provinces have volumes 10 times greater than the Columbia River Flood Basalt Province). The impact of these eruptions are difficult to model but thought to be severe, possibly causing mass extinctions. For example, the amount of sunlight reaching the surface would be reduced to the equivalent of the full moonlight. However, 5,000-10,000 years may have passed between eruptions, allowing the environment to recover from such large eruptions. Self and others (1997) concluded "that a continental flood basalt eruption probably could not cause mass extinctions, but a series of them during the growth of a CFB [continental flood basalt] province would have been able to stress the environment to such an extent that any major perturbation would have had a more extreme effect."