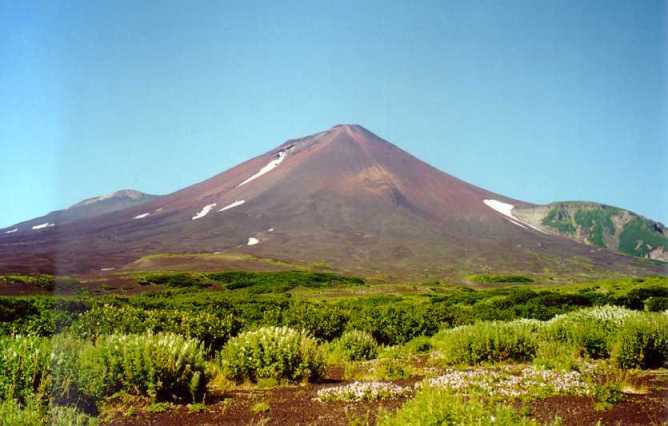 View from the north-east. At foreground is the 1986 plinian fall deposit.
Photo courtesy of Alexander Belousov and Marina Belousova, University of Moscow.

Chikurachki, the highest volcano on Paramushir Island in the northern Kurils, is actually a relatively small cone constructed on a high Pleistocene volcanic edifice. Oxidized scoria deposits covering the upper part of the young cone give it a distinctive red color. Lava flows from 1,816-m-high Chikurachki reached the sea and form capes on the NW coast; several young lava flows also emerge from beneath the scoria blanket on the eastern flank. The more erosionally modified Tatarinov group of six volcanic centers is located immediately to the S of Chikurachki. Tephrochronology gives evidence of only one eruption in historical time from Tatarinov, although its southern cone contains a sulfur-encrusted crater with fumaroles that were active along the margin of a crater lake until 1959.

Map of the Kurile Islands 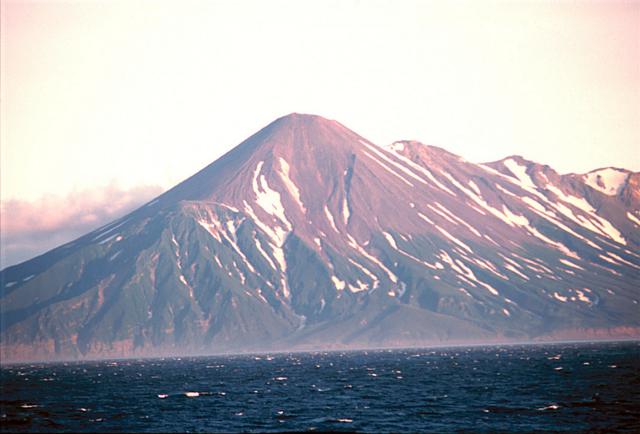 The NW slopes of Chikurachki, the highest volcano on Paramushir Island, rise above the Sea of Okhotsk. Oxidized scoria covering the upper part of the cone give it a distinctive red color. The Tatarinov group of six volcanic centers is located immediately to the south of Chikurachki, forming the ridge on the right horizon. In contrast to the frequently active Chikurachki, the Tatarinov volcanoes are extensively modified by erosion and have a more complex structure. Photo by Yoshihiro Ishizuka, 2000 (Hokkaido University).