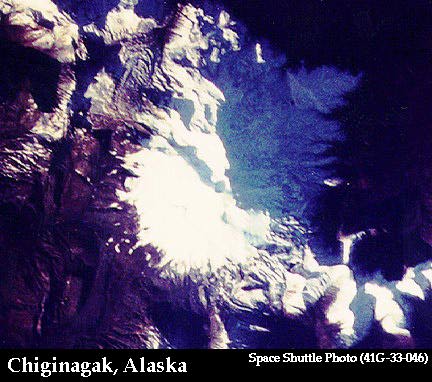 Chiginagak is a stratovolcano that stands 4,559 ft (1390 m) above the surrounding plain. Chiginagak's cone which is mostly made of andesite and dacite has a crater at its summit. An active fumarole sits along its northern slope at an elevation of 5,248 ft (1600 m). A small cloud is produced from this fumarole. Thermal springs can also be found just beyond the cone deposits downslope from the fumarole.

The oldest cone deposits remaining for this volcano are dacite block and ash flows that are found on the northwest slope. Most of the cone forming lavas of Chiginagak are andesite. Chiginagak's most recent deposits consist of an unglaciated lava flow and an overlying block and ash flow that extends east from the cone onto the floor of a glacial valley. Pyroclastic flows from Chiginagak, probably resulting from a dome collapse, cover a total 2.5 cubic miles (4 cubic km). Chiginagak's 1971 eruption seems to have been its one and only.