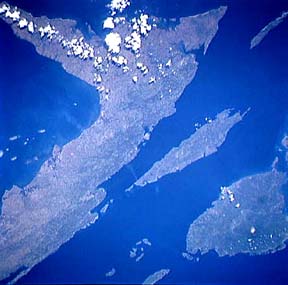 Bulusan is an active stratovolcano and makes the extreme southeast part island of Luzon peninsula (bottom right of photo). The summit crater is 1,000 feet (300 m) in diameter and there are numerous lava flows on the flanks. There are three craters on the southeast flank; the lower two are crater lakes. The islands of Masbate and Ticao are to the southwest (top of photo).