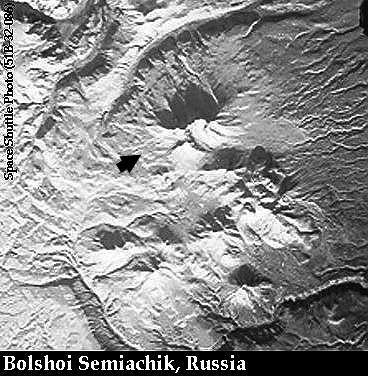 Bolshoi Semiachik is an extinct and eroded stratovolcano. Strong solfataric activity occurs on its southeastern cone (Burlyashy volcano) with fumaroles situated on its southwestern slope.Geysers and colorful hot springs are located 1.2 and 3.1 miles of to thesouthwest of its fumaroles. Bolshoi Semiachik sits in a large ring volcano-tectonic depression. Rocks from Bolshoi Semiachik are made of basalt, andesite and dacite. The volcano was built in two stages. The first stageincluded the development of lava flows of basalt and andesite. The second involved the formation of calderas which happened by destructive explosions with welded tuffs and ignimbrites being layed down with dacites. Bolshoi Semiachik has erupted at least twice, its last eruption occurring around 4450 BC.