Bazman is a 3490-m-high stratovolcano in a remote region in SE Iran. A well-preserved, 500-m-wide crater caps the summit of the dominantly andesitic volcano. Its satellitic lava cones have been the source of fresh-looking viscous lava flows of olivine basaltic composition. A steep-sided lava cone on the north flank produced a viscous lava flow that traveled to the north before diverging to the NW and NE. No historical eruptions are known from Bazman, but minor fumarolic activity has been reported. 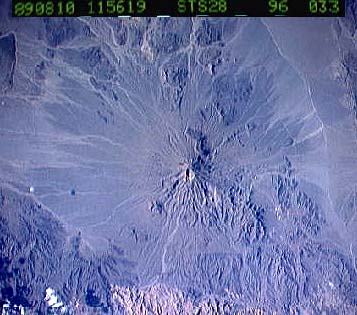 This photo from the Space Shuttle looks almost directly down on Bazman, a stratovolcano in southeast Iran. The more resistant rocks near the center of the photo are lava flows and plugs. They are surrounded by tuff. There have been no historic eruptions at Bazman but there are fumaroles.

Gansser, A., 1966, Part XVII, Iran: Catalogue of the active volcanoes of the world including solfatara fields, International Association of Volcanology, Rome, Italy, 19 p.