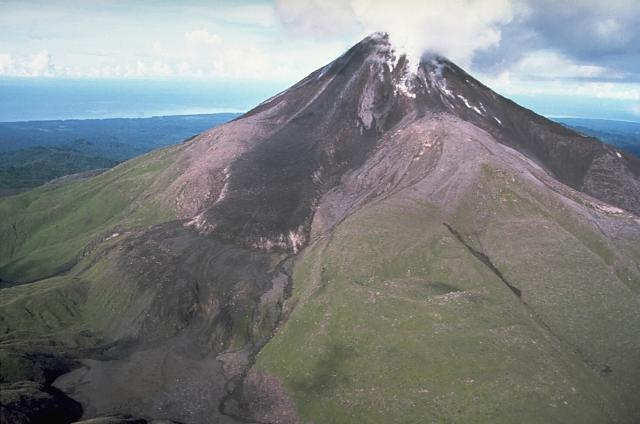 Steam clouds rise from a spectacular, but very slow-moving andesitic lava flow descending the NW flank of Bagana on April 26, 1988. The flow at that time had been moving for about 3 or 4 years, and is typical of the long-term lava effusion that began in 1972. The massive symmetrical lava cone, one of the most active volcanoes in Papua New Guinea, was largely constructed by an accumulation of viscous andesitic lava flows. At its present rate of effusion, the volcano could have been constructed in about 300 years.

Bougainville is an island northwest of the Solomon Islands and east of New Britain and Papua New Guinea. Bagana is one of seven volcanoes on Bougainville that have been active in the last 10,000 years. Bagana, classified as a lava cone, is made of thick steep-sided blocky lava flows. The lava flows are andesite and can be up to 500 feet (150 m) thick. Pyroclastic deposits are a minor volume of the volcano.

This photo of Bagana shows the southwest slopes of the volcano and was taken in October, 1964.
Photo courtesy of Jack Lockwood, U.S. Geological Survey.

Major eruptions occurred in 1950, 1952, and 1966. Bagana has been erupting since 1972, creating slow-moving lava flows. Some explosive eruptions produce nuee ardentes and voluminous ash clouds. An overflight of Bagana in August of 1995 revealed lava flows on the southwest flank on the volcano. 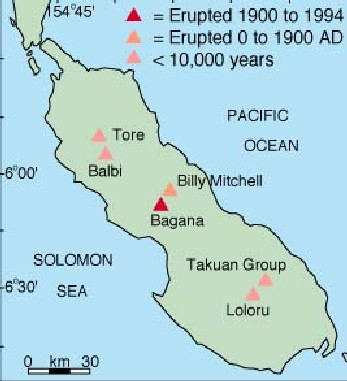 Location of major volcanoes on Bougainville Island. From Bultitude (1976).