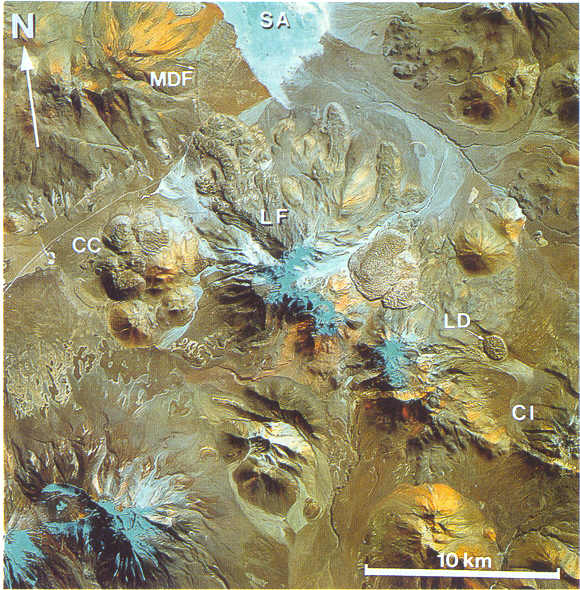 Azufre is the largest and youngest volcanic complex in a major chain that extends 50 km southeastwards from Palpana (6,023 m) to Inacaliri (5,626 m) on the Bolivian frontier (Figures 19.1, 19.2). Structurally, the location of these volcanoes appears to have been controlled by the Inacaliri lineament. A graben-like structure, the Cordon de Inacaliri (CI), has developed along this feature to the southeast of Azufre and its bounding faults are well displayed on the TM image. Four main components make up the Azufre complex. In chronological order they are:

(I) An older composite cone (Middle cone), forming the southernmost part of the complex and extending towards the massif of Cerro Aguilucho

(II) A large group of young lava flows (LF) on the northern flank of the volcano, originating from a cone (Northern cone) on the youngest and highest part of the existing structure. Although not pristine, these flows are morphologically well preserved and may be late-glacial in age. At the point where the largest flow approaches the railroad, a northward trending feature appears to be the western margin of a previously extensive débris avalanche (MDF) now largely concealed by the Salar de Ascotan (SA).

(III) The Chanka (Pabellon) dome complex (CC), on the west flanks of the volcano. These are steep-sided, well preserved dacite domes, and are probably post-glacial in age. A small avalanche deposit from the south western dome is conspicuous.

(IV) Two pristine dacite domes (LD) on the east flanks of the volcano (Figure 19.2). The smaller of the two, Cerro Apacheta, is clearly located on the northern bounding fault of the Inacaliri graben, and this fault also appears to have controlled the location of the larger dome. The summit complex is extensively altered and has been mined for sulphur. Fumarolically altered material washing down from the summit region is conspicuous in valleys on the western and north eastern flanks.

The post-glacial silicic domes on the eastern flank and in the Cordon de Inacaliri represent the most recent activity from this system. A K-Ar date from Cerro Aguilucho describes an age of 1.5 Ma, while a Cerro Pabellon biotite was dated to 0.05 Ma (Urzua et al., 2002).

The region is hydrothermally active, with two fumaroles on Cerro Apacheta at temperatures of 109° and 118°. These are currently being studied as prospects for geothermal energy.

Lavas from Azufre and the Chanka domes were sampled during the reconnaissance by Roobol et al. The Azufre lavas (andesites) were geochemically similar to those from other volcanoes in the area, but the Chanka domes (dacties) were found to be markedly richer in Rb and Th than other extrusives with similar SiO2 contents.

TM image of Volcan Azufre. Azufre is located at the northeastern extension of the Cordon de Inacaliri (CI) within which the two most recent eruptions, of the lava domes (LD), occurred. Young lava flows (LF) have "healed" the collapsed northern portion of the edifice from which a débris flow resulted. This is now largely obscured by the Salar de Ascotan (SA) but the western margin (MDF) can still be seen. The Chanka domes (CC) lie on the extension of the Cordon de Inacaliri.