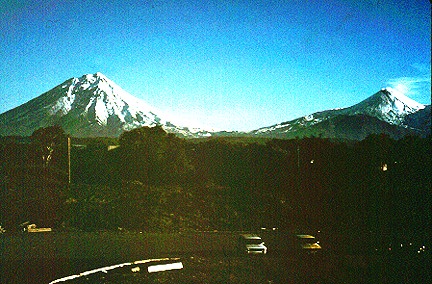 Avachinsky (on the right) is one of the most active stratovolcanoes on the Kamchatka peninsula. It consists of a younger cone inside the rim of an older caldera. Avachinsky has been classified as a Somma volcano based on its similarities with Vesuvius.

Avachinsky has erupted at least 16 times since 1737. A large (VEI=4) explosive eruption occurred at Avachinsky in 1945. The most recent eruption was in 1991 and produced lava flows, a dome, and mudflows. Koryaksky is on the left. 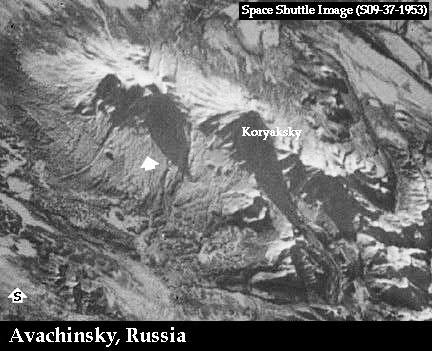 Avachinsky was built in several stages. Eruptions of andesite and then basalt created a volcanic cone. Later, the caldera and its graben were formed. Then, domes and, finally, the present Avachi cone was formed inside the caldera. The southern portion of the caldera has been destroyed by faulting and has opened the caldera on this side. The main crater is situated in the top of the active cone of Avachinskaiasopka.

A strong, explosive eruption occurred in 1945, creating a steep walled crater with a diameter of 1082 ft (330 m) and a depth of about 853ft (260 m). Its southern ridge rises 197 ft (60 m) over the northern. Fumaroles exist on the bottom of the crater and on the outer slopes near the northwestern rim. The crater's appearance changed in width and depth from eruption to eruption.

Fifteen individual lava flows exist on the present Avachi cone, most of these being located on its southern slopes. Only their leading fronts are visible when they stick out from underneath Avachinsky's pyroclastic deposits and drift material. These streams have a blocky appearance. These streams, reaching 2.5-3.1 miles (4-5 km) inlength and up to 6.2-9.3 miles (10-15 km) in thickness, are oftenbordered by swells which makes them look like narrow grooves. Eruptions from Avachinsky are mostly explosive and are often accompanied by avalanches and mud flows.