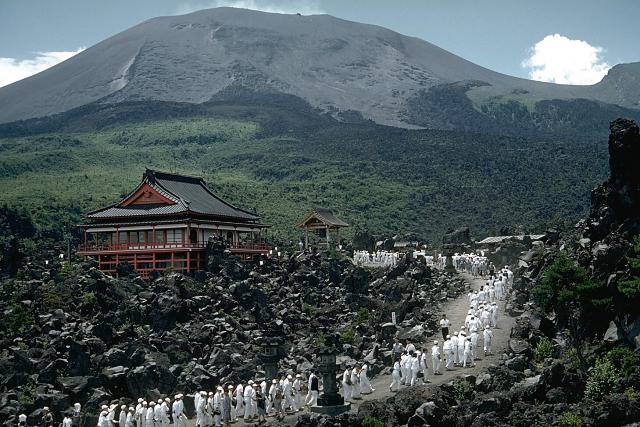 A temple sits astride the Onioshidashi lava flow on the north flank of Asama volcano.
Photo by Richard Fiske, 1961 (Smithsonian Institution).

Kurohu-yama is the name of the western crater rim of the older stratovolcano. It stands 7888 ft (2405 m) high. Erosion has enlarged this crater to 1.25 miles (2 km) around. Water rests in the crater and is drained to the southwest. The eastern part of this stratovolcano has been down-faulted and buried under a shield volcano. A younger stratovolcano also lies on top of this shield.

Asama-yama sits on a flat plateau. This plateau is about 3300 ft (1000 m) high. It is made of rocks erupted from other volcanoes, lake deposits and rocks that made up older volcanoes.

Hotoke-iwa exists as a bulge to the southeast of the outer crater of the younger stratovolcano. Hotoke-iwa is a shield volcano with a steep slope.

The first stage of activity of Asama was the eruption of Kurohu-yama. This cone shaped stratovolcano grew 6560 ft (2000 m) from its base at this time. Its crater began to grow by erosion once the cone itself stopped growing. The eastern part of Kurohu-yama was destroyed by down-faulting and large scale steam explosions. 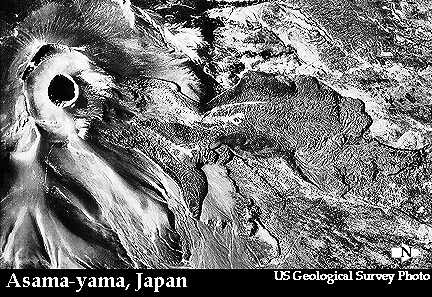 The second stage of activity involved the eruption of Hotokeiwa. Several lava flows occurred during this stage. These are now exposed at Hotokeiwa SSE of the present active crater. Ko-asama-yama is a parasitic lava dome on the eastern side of Asama. It stands 5428 ft (1655 m) high and is made of a rock similar to dacite erupted during formation of the shield volcano. The western side of the shield was destroyed by down-faulting.

The third stage of activity consisted of the eruptions of two pumice flows. These flows had great volume that spread over wide areas to the north and south of the shield volcano.

Andesite stratovolcanoes grew during the fourth stage of activity. The recent eruptions produced thick lava flows and pyroclastic ejecta together with pyroclastic flows of two different types at several different times. The outer crater of the cone was probably formed by collapse right after one of the pyroclastic flows. On the southern side of this cone there is a parasitic lava dome made of andesite. Its name is Sekison-zan. It rises 656 ft (200 m) from the surrounding cone. This cone is younger than the cone of Kurohu-yama but older than the recent cone. Its age relation with the shield volcano is unknown.

Asama has erupted 121 times. Most of these eruptions have been Vulcanian. A weak solfatara is active at the southwestern crater rim of the volcano. The last eruption of Asama was in 2003.