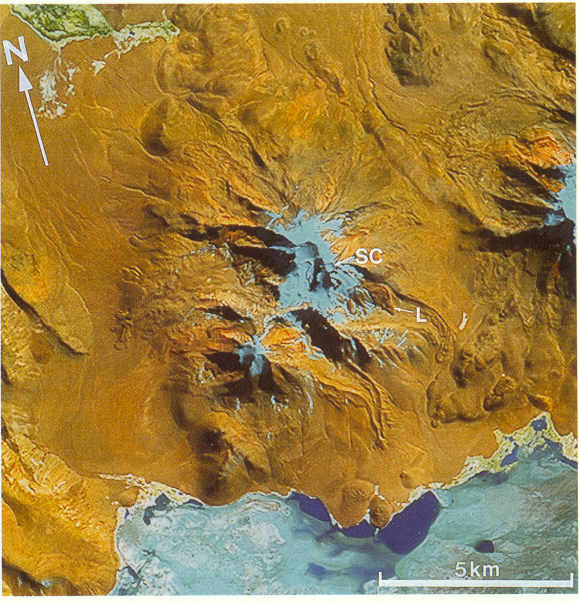 Volcan Arintica is part of a larger volcanic system with Cerro Puquintica to the east and Cerro Calajalata to the west (Figure 12.1;12.2). Although all these edifices are heavily dissected and there are well developed moraines on the lower flanks, there is apparently a post-glacial lava flow high up on the SW flank of Arintica and the volcano also has a relatively well preserved summit crater complex, which is site of the most recent activity from this system. The most recent activity appears to be the lava flow on the SW flank. Wörner et al. (1989; unpublished data) also report the presence of fresh, glassy, bread-crust bombs strewn over the southern flanks.

TM image of Volcan Arintica. The well preserved summit crater (SC) and the young Post-glacial lava (L) are the most important features on this heavily glaciated and dissected edifice. The edge of Cerro Puquintica just to the east of Arintica is also visible. The salar in the bottom of the image is the salar de Suriri.

No current activity is known.