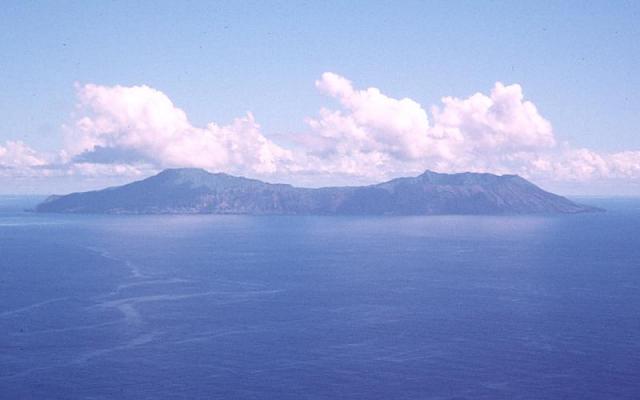 The two coalescing volcanoes forming the elongated, 9-km-long island of Anatahan in the central Mariana Islands are apparent in this aerial view from the south. The low point in the center of the island results in part from overlapping 2.3 x 5 km wide calderas, the largest in the Mariana Islands. The larger western caldera is 2.3 x 3 km wide and extends eastward from the 788-m-high summit of the western volcano (left). The volcano's first historical eruption in 2003 took place from a small crater within the 2-km-wide eastern caldera.  Photo by U.S. Geological Survey, 1994.

The elongated, 9-km-long island of Anatahan in the central Mariania Islands consists of two coalescing volcanoes with a 2.3 x 5 km, E-W-trending summit depression formed by overlapping summit calderas. The larger western caldera is 2.3 x 3 km wide and extends eastward from the summit of the western volcano, the island's 788 m high point. Ponded lava flows overlain by pyroclastic deposits fill the caldera floor, whose SW side is cut by a fresh-looking smaller crater. The summit of the lower eastern cone is cut by a 2-km-wide caldera with a steep-walled inner crater whose floor is only 68 m above sea level. The sparseness of vegetation on the most recent lava flows on Anatahan indicate their probable Holocene age.

More information on Anatahan from the USGS can be found HERE. 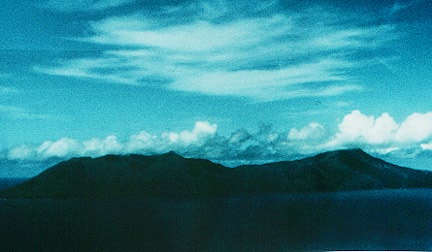 Anatahan is a small island (6 by 2 miles, 9 by 3 km) made of overlapping calderas. 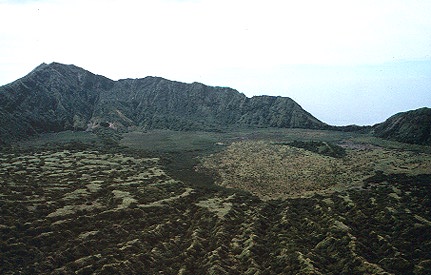 Anatahan has no known historical eruptions. Recent activity includes a period of felt earthquakes that began on March 30, 1990. Felt earthquakes continued for two more days. An over flight revealed that the crater lake in the east part of the main caldera had become turbulent and changed color. The intensity of fumaroles had increased and the smell of rotten eggs was reported. The volcanic unrest caused the evacuation of the island's 23 residents. A field investigation found a deposit from a phreatomagmatic eruption that is younger than human occupation of the island. Overflows of hot acidic water from the lake had killed a large area of vegetation. Tilt on the flank of the volcano had not changed. Electronic distance measurements measured extension across the volcano up to about 3.5 inches (91 mm). Volcanologists returned to the island in late June. During their 2 day visit no earthquakes larger than magnitude 2.5 were recorded. Measurements of deformation revealed no significant changes since April. However, the crater lake had disappeared and was replaced by several pits and the area was vigorously steaming. Swarms of earthquakes occurred again at Anatahan in late May to early June of 1993. The islands was declared off limits. No eruption occurred. Photograph by Frank Trusdell, U.S. Geological Survey.