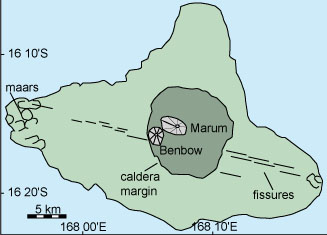 General map of Ambrym showing the main volcanic features (caldera, cones, maars, and fissures). Ambrym is the most voluminous active volcano in Vanuatu. Marum and Benbow are post-caldera cones. The caldera is similar in size to calderas associated with large Plinian eruptions. From Robin and others (1993).

Ambrym Island is a large shield volcano with a caldera. The caldera formed in about 50 A.D. with an eruption of VEI 6. It is also a very active volcano with 48 eruptions since 1774. Most of these eruptions are at cones inside of a caldera (5.5 by 7.5 miles; 9 by 12 km).The eruptions are explosive and usually from a central vent, There have been a few flank eruptions. Fifteen erupts produced lava flows. Ten eruptions involved a lava lake. There were fatalities in two eruptions at Ambrym. In 1894, six people were killed by volcanic bombs and four people were overtaken by lava flows. In 1913, 21 people were killed during an explosive eruption. Acid rainfall in 1979 burned some of the inhabitants. Local water supplies were contaminated and had a pH of 5.2-5.5.

All photographs on this page are courtesy of Mike Lyvers. 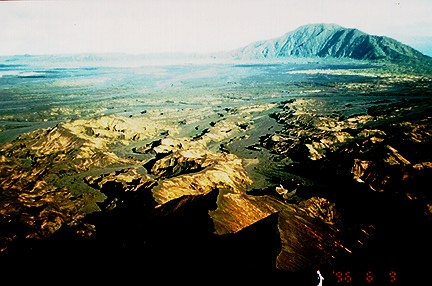 View of the ash plain from a ridge on Benbow. The caldera rim is in the distance on the right. The caldera is about 7.5 miles (12 km) in diameter. 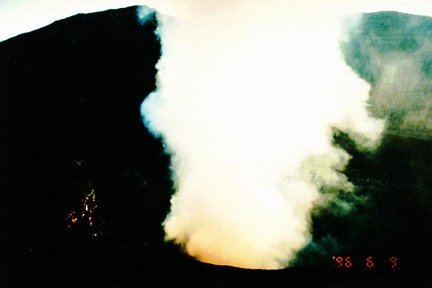 View inside Benbow's crater. The crater contains a lava lake. 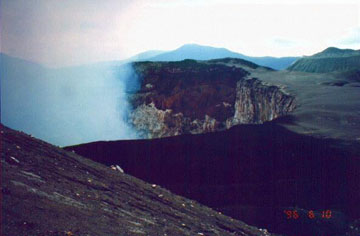 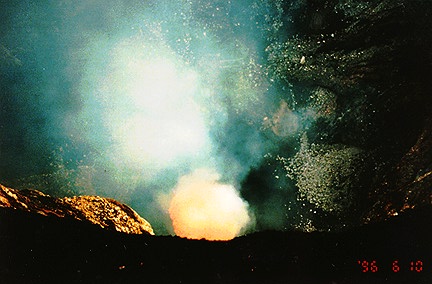 Wide-angle view of the interior of crater 3 with lava lake. 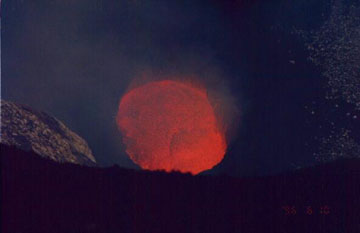 Closeup of the lava lake.

Mike Lyvers reported "Thunderous explosions occurred every 10 minutes or so, engulfing me in foul gases and

warm glassy filaments of Pele's hair which also covered the ground like spider webs at the craters edge." 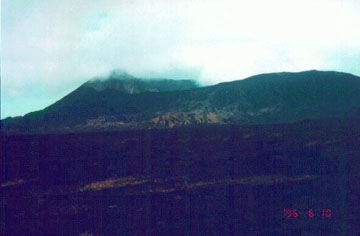 View across the ash plain of the caldera to Benbow, one of Ambrym's main vents.