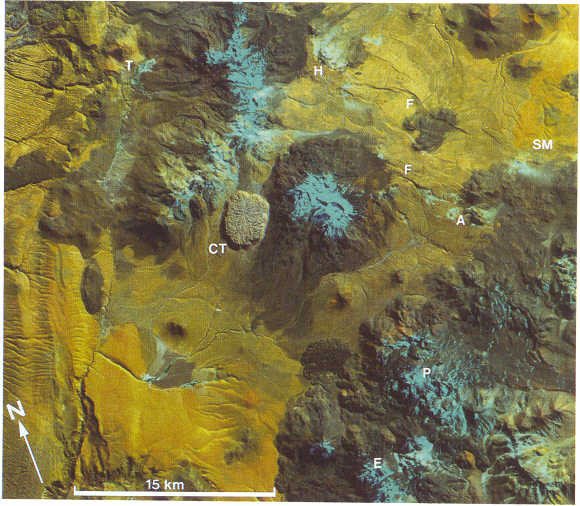 Since the late Miocene (~10.4 Ma), an intense episode of ignimbrite volcanism has resulted in a major silicic volcanic province, the Altiplano-Puna Volcanic Complex (APVC), between latitudes 21º- 24ºS in the Central Volcanic Zone (de Silva, 1989a). The APVC covers an area of about 50,000 km2 between the Atacama basin and the Altiplano. Several large nested caldera complexes were sources of huge regionally distributed ignimbrite sheets which dominate TM images of the APVC (de Silva, 1989b; de Silva & Francis, 1989). Detailed studies of the calderas have gathered valuable information from reconnaissance field studies (Guest, 1968, 1969; Baker, 1977; Gardeweg & Ramirez, 1987; Ort et al., 1987, 1988) and remote sensing studies (Francis & Baker, 1978; Baker, 1981). Most of the major calderas are complex nested structures with evolutionary histories spanning several millions of years.

Although no major ignimbrites have been erupted, there has been Holocene activity within the APVC in the form of large silicic lava domes and flows which are interpreted as leaks from a large crustal magma generation zone underlying the APVC (de Silva, 1989a). Many geothermal manifestations also occur throughout the region. Most of these are inconsequential, but the existence of two large active geothermal fields indicates that the province as a whole is still active. Seismic studies have revealed a low-velocity zone 19 km below the complex, indicating the prescence of a sill-like magma body (Chmielowski et al., 1999).

de Silva (1989c) and Ort et al. (1988) have made detailed petrological and geochemical studies of the ignimbrites of the APVC. Although Panizos lies considerably to the east of the province the ignimbrites are rather similar in their physical and chemical characteristics. The ignimbrites are typically calc-alkaline, high-K dacites with minor rhyolites. Source magmas for the pyroclastic rocks were typically phenocryst-rich (~50 vol %) with an assemblage of plagioclase, quartz, biotite, hornblende and oxides with minor pyroxene, rare sanidine and accessory phases. Phase equilibria indicate that the magmas equilibrated at temperatures of 705 - 850 ºC under conditions of relatively high ƒO2 (-11.68 to -17.02). Water contents of the magmas were high; ~4 - 5%. The ignimbrites are LREE enriched with Ce/Yb ranging from 7.1 - 15.3. Initial 87Sr/86Sr varies from 0.708 to 0.711 but shows no systematic variation with SiO2 or the high Rb/Sr, éeNd ranges from -7.1 to -10.6 with constant Sm/Nd, and Pb-isotopes show little variation with values ranging from 38.85 - 39.07, 15.67 - 15.71 and 18.82 - 19.01 for 208Pb/204Pb, 207Pb/204Pb, and 206Pb/204Pb respectively. Although the ignimbrites from Panizos are characterised by higher 87Sr/86Sr of ~ 711 - 718, the Nd- and Pb-isotopes are rather similar to the other APVC. de Silva (1989a,c) has argued that APVC ignimbrites, in common with other large-volume ignimbrites from the CVZ, are dominantly crustal melts, generated by crustal melting resulting from crustal thickening and the ascent of mantle-derived mafic magmas into the lower crust from the Benioff zone. Eruption of large young extrusives such as the Chao dacite (q.v.) indicate that this is an on-going process.

Geothermal Manifestations within the APVC

In addition to numerous minor warm springs within the area of the APVC, there are two major active geothermal fields; one at El Tatio in Chile and another at Sol de Manana in Bolivia. While the former is included in the catalogue of active volcanoes of the world by Casertano (1963), there is no mention of the latter.

The El Tatio geothermal field is located at 22º20'S 68º01'W on the western flanks of the modern volcanic chain. It has been the subject of exploration as part of a United Nations Development project undertaken with the Chilean Government in the 70's (Healy & Hochstein, 1973; Lahsen & Trujillo, 1976). However, although a feasability study proved that the field was technically viable, its remote location, lack of a market and other economic factors precluded development beyond the exploration stage. The Chilean government development agency, CORFO, still maintains a caretaker camp at Tatio.

Surface thermal manifestations are scattered over an area of some 30 km2 at elevations from 4,200 to 4,600 m a.s.l, in the upper levels of the downfaulted block of the Tatio graben. Small geysers, springs of boiling water, extensive sinter terraces, and rare mud volcanoes are concentrated over an area of about 10 km2. From here, several small colourful streams coalesce to form the Rio Salado which drains westward through a narrow valley in the horst block forming the margin of the graben. Details of the structure, geochemistry and geothermal potential of the field have been discussed by Healy & Hochstein (1973), Lahsen & Trujillo (1976) and Cusicanqui et al. (1976).

Sol de Manana is located in Bolivia at 22º23'S; 67º4'W approximately 22 km south of Laguna Colorado. In 1986 a feasability study under a United Nations development program by the Bolivian government (ENDE) in collaboration with the Italian government was initiated which is still under way. Geothermal manifestations occur over an area of about 120 km2 at elevations between 4,800 to 5,000 m. Sol de Manana (~10 km2) itself is the main field, but there is a much smaller area to the southwest of Cerro Apacheta, and another at Huayllajara about 12 km to the northwest. Thermal manifestations in this area are somewhat different in character to that at El Tatio. While a few geysers are found, the main features are large vigorously boiling mudpools. There are few springs and little surface runoff.

Although El Tatio and Sol de Manana are in close proximity, no attempt has been made to determine the interrelation of these two fields due to the complex political relations between Chile and Bolivia. Apart from the similarity in the composition of the thermal waters (H. Rosales pers. comm. 1989), they lie within about 30 km of each other along a series of recent NW-SE trending normal faults which extend some 100 km further northwestwards. Furtherermore, both are located approximately on the boundary of the Pastos Grandes and Cerro Guacha caldera systems. Volcan Putana, one of the few volcanoes with strong active fumaroles, is also located only 18 km south of Sol de Manana.

At El Tatio, Henley & Hochstein (1973) and Lahsen & Trujillo (1976) established that the hot water flows horizontally northwestwards through the 4.2 Ma Puripicar ignimbrite which underlies the field. This same ignimbrite underlies the Sol de Manana area, and may be the main aquifer there. On the basis of the location, character and intensity of the manifestations, it seems likely that the surface geothermal fields are fueled by the hydrothermal systems of the calderas, with Sol de Manana being more proximal to the thermal source and El Tatio representing the distal run-off at lower elevations. Transport of the hot fluids occurs laterally along the system of recent NW-SE trending faults, following the regional slope.

Figure S10a - TM image of a portion of the APVC showing the location of the Sol de Mañana (SM) and Tatio (T) geothermal fields in Bolivia and Chile respectively. Small areas of geothermal activity are also found at Cerro Apacheta (A) and Huayllajara (H). The geothermal activity seems to be concentrated along several young normal faults (F). Holocene volcanic centers in this region are Volcan Putana (P; VCA no. 21), Volcan Escalante (E; VCA no. 22) and Cerro Tocopuri (CT; figure M5).