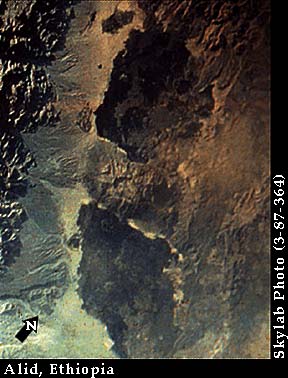 Alid is a little-visited volcanic structure in the Danakil depression of Eritrea and covers an area of about 20 sq. miles (30 sq Km). Based on brief visits by Italian geologists early this century Alid was thought to be a stratovolcano with a broad caldera, and basaltic lava fields on its northwest and southeast slopes. New studies by US Geological Survey scientists and Eritrean colleagues show that Alid is actually a structural uplift - a dome - whose summit has collapsed. There have also been explosive eruptions which deposited pyroclastic flows around the uplift. So Alid is a very peculiar type of volcano-tectonic structure.

Alid has been very important geographically. Before Alid was uplifted the Red Sea covered part of Afar. After the Alid activity the sea could not enter Afar and gradually the water there evaporated, leaving behind vast plains of white salts. 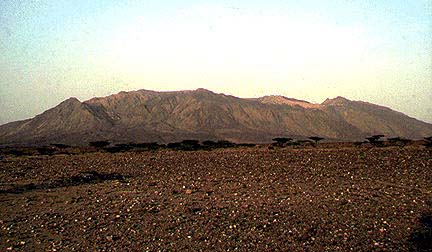 View of Alid volcanic center from the west, across river sediments shed from the Precambrian Eritrean highlands. Alid is a structural dome and rhyolitic volcanic center that rises about 2300 ft (700 m) from the floor of the Danakil Depression, an actively spreading graben that extends north from the Afar triple junction. The summit of Alid is 2985 ft (910 m) above sea level.   Image credit: USGS 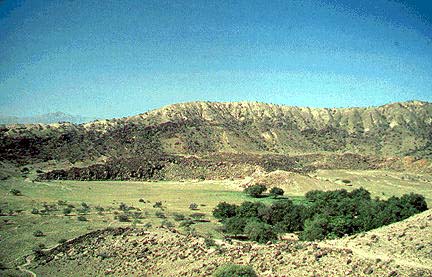 View of the western portion of the summit basin of Alid volcanic center (looking from the east). The western crater rim is covered with buff-colored pumice, created during the last major pyroclastic eruption from Alid, some 23,000 years ago. Just in front of the far rim is an arc-shaped lava flow erupted just after the pumice was deposited. The summit basin is believed to have formed initially due to collapse associated with doming, but was likely enlarged during the pyroclastic eruptions. The summit area of Alid receives more rainfall than the surrounding Danakil lowlands, and supports limited grazing of cows and goats. 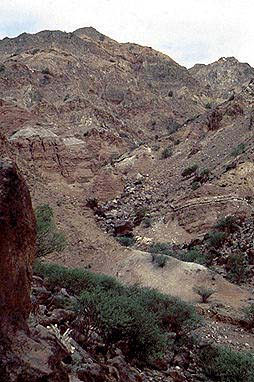 Marine sediments are found several hundred meters above the base of Alid and the graben floor of the Danakil Depression. Alid is a structural dome formed by intrusion of rhyolitic magma beneath flat-lying lavas and marine sediments. The sediments were arched and bowed by the ascending magma and now dip steeply off the flanks of Alid.   Image credit: USGS 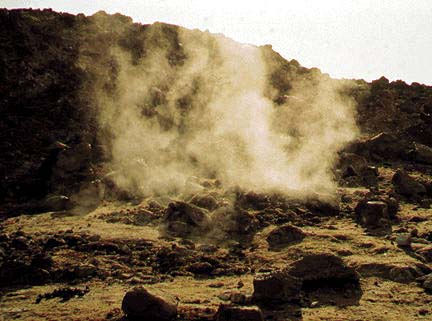 Steam issues from Darere, a fumarole (steam vent) found in Alid's summit basin. The steam escapes at the boiling point of water (~98°C at this elevation) and is accompanied by abundant CO2, H2S and H2.