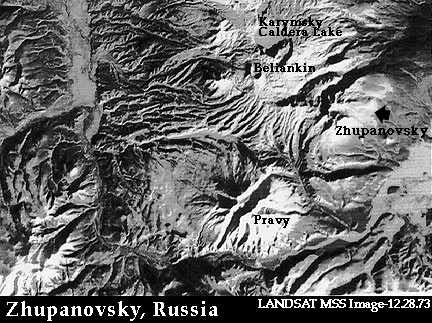 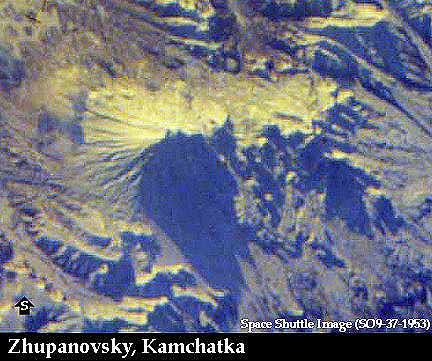 Zhupanovsky has a big, half-destroyed crater on its summit. The volcano itself is built of andesites and basalts. The crater depression on the main summit of the volcano has a diameter of about 0.6 miles (1 km). Near the southern rim of the crater are cylindrical openings in the ice. These have a diameter of about 250 ft (75 m). Large quantities of solfatara gasses come from these holes. There are also solfataras on the outer slopes of the summit. These solfataras deposit great amounts of sulphur.

The first parasitic cone to the west has a crater about 490 ft (150 m) around. It is open to the east. The outer slopes of the crater are covered by fresh lava streams. In 1940, there was fumarolic activity in a number of places. Fumaroles have also been found inside the crater. Fresh streams of lava are found only on the west side of the summit of the first parasitic cone. The surface of this lava is blocky.

Zhupanovsky has vulcanian eruptions. It has erupted 12 times. The most recent of these was in 1959. Lava from these eruptions is composed mainly of andesites and basalts.