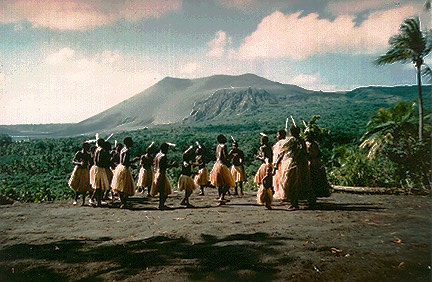 Yasur is an active stratovolcano. It began erupting some time before 1774 (Captain Cook made the first report) and has be going every since. It has had, at times, a lava lake at a central vent. Some phreatic explosive eruptions have occurred. Eruptions tend to be Strombolian, tossing out bombs, or mild Vulcanian explosions. Ash clouds have reached elevations of 6,500 feet (2,000 m). Yasur has caused damage and been associated with a tsunami. There have been at least three deaths at Yasur in recent years. Yasur is 245 miles (390 km) south-southeast of Ambrym. 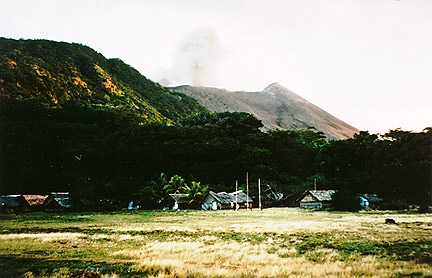 Yasur from Sulphur Bay. John Frum village is in the foreground. Some bombs are thrown as far as the forested slopes to the left Yasur's summit. Photograph courtesy of Mike Lyvers. 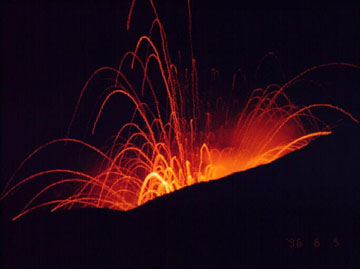 Night photos of a small pyroclastic eruption of Yasur. Trails of light show the path of bombs thrown from the volcano. Photograph courtesy of Mike Lyvers. 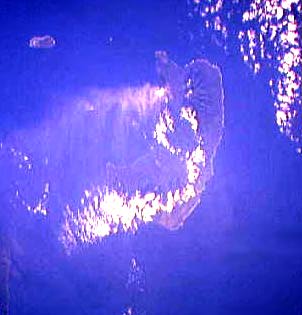 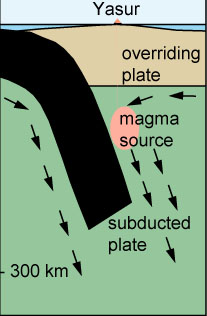 Cross-section of upper mantle and crust beneath Yasur, southern Vanuatu volcanic arc. The eastward-moving Australian Plate, here made of oceanic crust and upper mantle, is subducted beneath the westward-moving Pacific Plate. Yasur is on the Pacific Plate. The distribution of earthquakes in the subducted plate indicates that it extends to a depth of at least 150 miles (250 km). Magma is generated where the mantle in the asthenosphere is modified by fluids leaving the subducted plate. Compare to the tectonic setting of Lopevi, northern Vanuatu volcanic arc. From Monzier and others (1997).

Eruptive activity reamin at normal levels throughout March. An average of 500 explosions per day were detected.

On August 29th, at 15:00 (local time) a magnitude 6 volcanic earthquake occurred. This was the largest earthquake recorded at Yasur since seismic stations were installed in October 1992.