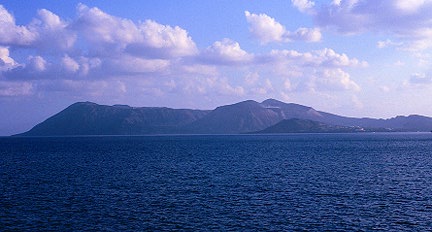 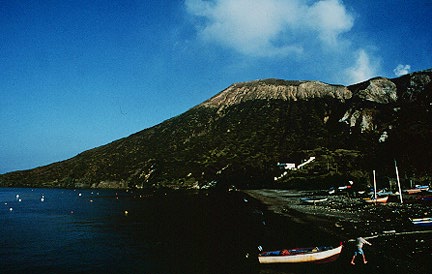 This photo shows the flanks of the older stratovolcano that makes the southern part of the island.
Photograph copyrighted and provided by Steve O'Meara of Volcano Watch International.

The history of Vulcano begins with the formation of a stratovolcano that collapsed to producing the Il Piano caldera. The caldera is partially filled with pyroclastic deposits and lava flows. This stratovolcano and caldera make the southern part of the island. 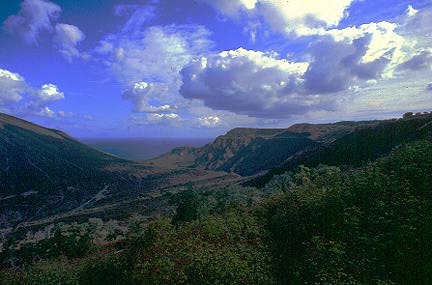 The Lentia lava dome complex grew to the northwest of the older stratovolcano. The dome complex also collapsed to produce a caldera. This photo shows the southeast wall of the caldera. Photograph by Chuck Wood. 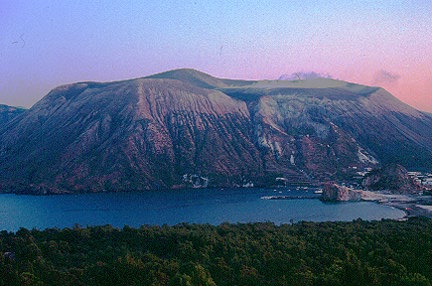 The Fossa cone grew within the Lentia caldera. Fossa makes up most of the northern part of the island. The cone began to form sometime after 11,000-8,500 years ago. At least four volcanic cycles constructed the cone. Each of the four known cycles had different vent locations and different eruptive histories. In general, however, each cycle started with phreatic eruptions and ended with eruptions that produced pumice fall deposits or lava flows. Photograph by Chuck Wood.

Click here to see a panorama of Fossa cone. 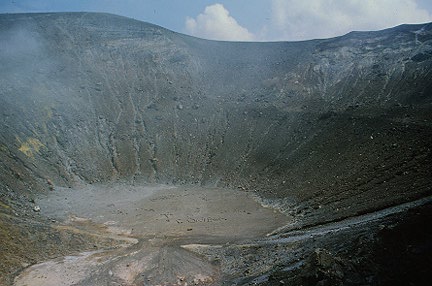 Inside the Gran Cratere at the summit of the Fossa cone.
Photograph copyrighted and provided by Steve O'Meara of Volcano Watch International. 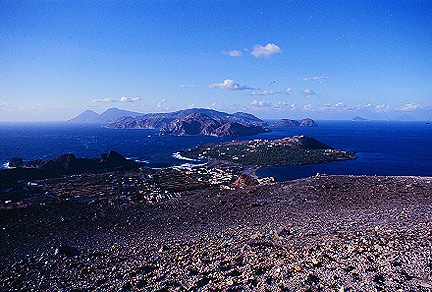 The youngest cone on the island, Vulcanello, began to form in 183 B.C. This photo is looking north from Fossa cone. Vulcanello is in the middle ground. The island of Lipari is just beyond Vulcanello. Photograph by Chuck Wood. 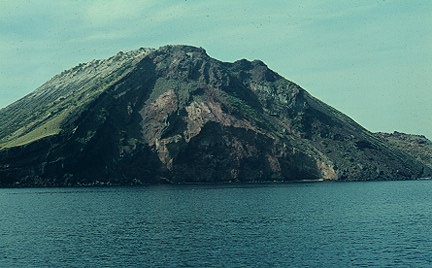 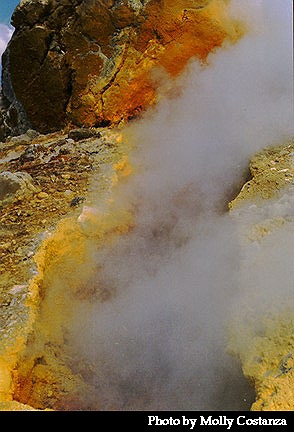 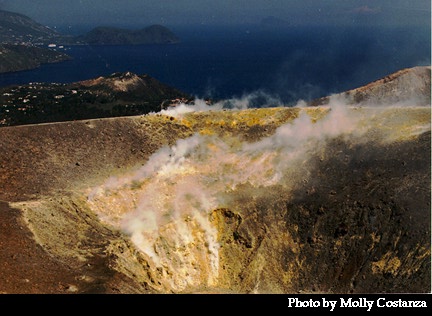 The Vulcanian style of eruption is based on the 1888-1890 eruption of Vulcano. Vulcano was quiet for the preceding 100 years. The eruption started with the ejection of blocks of old vent material. As the eruption progressed it began ejecting fresh lava in the form of blocks, bomb, and ash. Breadcrust bombs, distinctive to this style of eruption, were ejected about half-way through the eruption. Explosions were intermittent and separated by quiet periods lasting a few minutes to a few days. Explosions varied in strength. Only the largest explosions could throw blocks and bombs. Strong eruptions were separated by longer quiet periods. No domes or lava flows were produced at the end of the eruption. 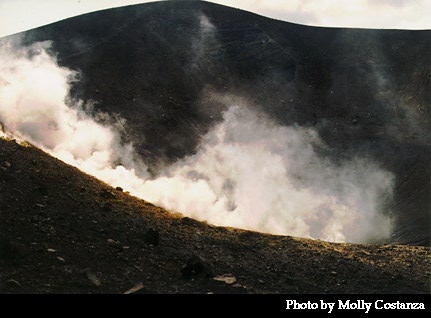 Our word volcano owes it's origin to Vulcano. The Roman god of fire, responsible for making the weapons of the gods, was called Vulcan and he lived within the volcano we call Vulcano. The glow of eruptions was thought to be from Vulcan's forges as we worked beneath the earth.

Imbo, G., 1965, Catalogue of the active volcanoes of the world including solfatara fields, Part XVIII, Italy: International Association of Volcanology.