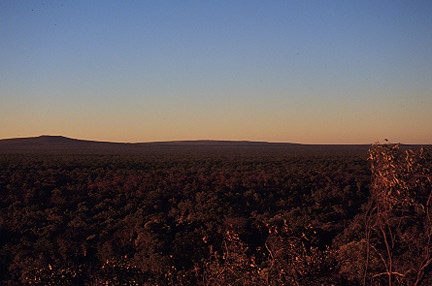 Undara volcano is one of 160 volcanoes in the McBride Volcanic Province. The province is about 125 miles (200 km) southwest of the city of Cairns and along the crest of the Great Dividing Range. The province is about 50 miles (80 km) in diameter and characterized by numerous cones and broad lava plains. Volcanism began in the McBride Province about 3 million years ago. Undara, a shield volcano, is in the center of this photo. Unlike many vents in the province Undara is made almost entirely of lava flows and lacks pyroclastic material. Racecourse Knob, another shield volcano, is to the left of Undara. Photograph by Steve Mattox. 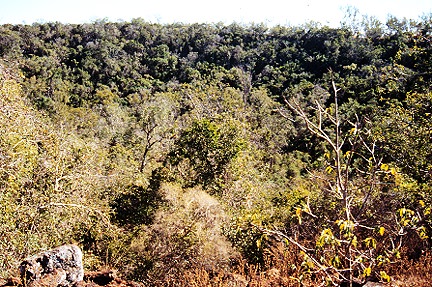 The Undara cone rises 120 feet (40 m) above the surrounding apron of lava flows and is 1,400 feet (425 m) in diameter. The crater of Undara volcano, shown is this photo, is 1,000 feet (330 m) across and 200 feet (60 m) deep. A bench halfway down the crater suggests a lava lake may have once been present. The lava flows at Undara are some of the longest on Earth, reaching lengths of 100 miles (160 km). Undara is also famous for its spectacular caves. Photograph by Steve Mattox. 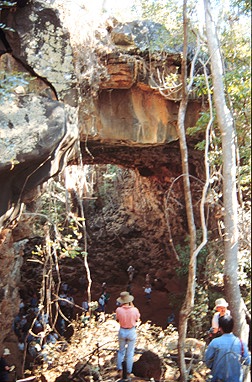 The Arch is a short section of lava tube that did not collapse. The tube is about 46 feet (14 m) tall (note the people beneath the Arch for scale). The thickness of the roof above the tube is about 26 feet (8 m). A stack of at least 5 lava flows are exposed in the walls of the collapsed tube. The tube formed in the second or third flow (below the surface) and eroded down through the older flows beneath it. In Hawaii, lava tubes can cut down into the flows beneath them at rates as high as 4 inches/day (10 cm/day). At no time was the entire tube filled with lava. Most likely, the lava was at most a several feet (a few m) deep, even when the tube was 46 feet (14 m) tall. Photograph by Steve Mattox. 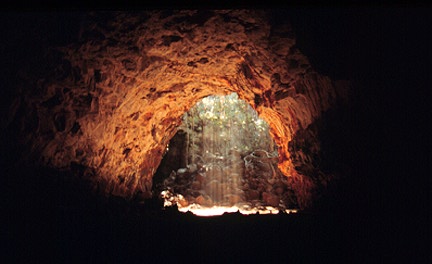 Some lava tubes in the Undara flows have drained to create cave systems that extend for more than 20 miles (30 km). Ewamin Cave is a section of the same lava tube exposed at the Arch. Ewamin Cave is about 25 feet (8 m tall) and 72 feet (22 m) wide. Over 50 caves have been found at Undara. Photograph by Steve Mattox.

A unique feature at Undara is called the Wall. The Wall is a continuous ridge for 25 miles (40 km). The Wall rises 65 feet (20 m) above the adjacent basalt lava flows. The margins of the flow slope about 20 degrees. This photo shows the sloping margin of the Wall (behind the trees). Note vehicles and geologists for scale. Photograph by Steve Mattox. 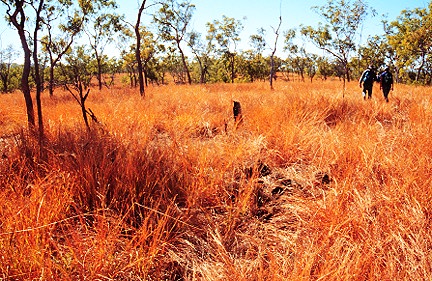 This photo is along the axis of the Wall. The axis of the ridge is a near horizontal surface about 230 feet (70 m) wide. The tops of the sloping margins of the Wall are on the right and left edges of the photo. The Wall is an inflated lava flow, also called a lava-rise structure. The flow was probably contained in the former course of a small creek. Undara volcano and its flows are about 190,000 years old. Because of its age the surface of the lava flows are buried under soil or vegetation. Note geologists for scale. Photograph by Steve Mattox. 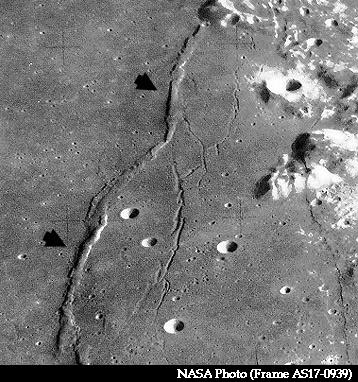 The Wall is believed to be the closest terrestrial analogue to the basaltic ridges seen on the moon. The longest lava flows in the Solar System are on Venus. Photo courtesy of NASA. Frame no. AS17-0939.

The Wall is a linear ridge over 25 miles (40 km) long in the Undara flows. The Wall is 65 feet (20 m) higher than the adjacent lava flows and about 650 feet (200 m) wide. The top of the Wall is flat. The margins of the Wall are very steep. The Wall is thought to be an inflated lava flow.