The Grand Canyon is one of the most spectacular geologic features on Earth. Few people realize that the Canyon also offers some of the most unique volcanic features in North America. These features reveal a battle between the lava flows, which cascaded into the river, making a series of dams and enormous lakes, and the power of the Colorado River, which cut through the dams to return itself to equilibrium.

The Uinkaret Volcanic Field covers about 600 square miles (1,500 square km) extending about 50 miles (80 km) north from the Colorado River. The Uinkaret volcanic field is similar to the more familiar San Francisco Peaks volcanic field near Flagstaff, Arizona. The volcanic features, basaltic cinder cones and lava flows, lie within the Canyon and on the plateaus to the north. The cones and flows have formed in the last 2 million years. 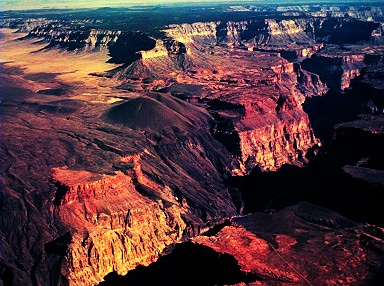 A "frozen" lava falls in the inner gorge of the Grand Canyon near mile Mile 183. View is to the northeast. The large cinder cone on the rim is Vulcan's Throne. Lava flows near Vulcan's Throne cascaded into the inner gorge of the Canyon and formed a lava dam. It was the most recent lava dam to form on the river. The vertical cliffs formed by lava flows are the remnants of older lava dams. Each of these dams impounded the water of the Colorado River to form a temporary lake that extended upstream. 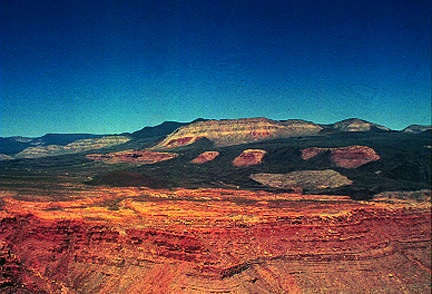 Lava cascade into Whitmore Wash. The view is looking northeast from near Mile 193. Whitmore Wash is a major tributary into the Colorado River. The flows cascades down from the Uinkaret Plateau and the Esplanade Platform. Once the lake filled behind each dam water began to cascade over the barrier. Water flowing over some of the larger dams created water falls 2,000 feet (600 m) high. Over time the water falls eroded nearly all of the barriers away, leaving only remnants of the lava dams on the walls of the inner gorge. Most of the dams were cut through by the river in less than 20,000 years. 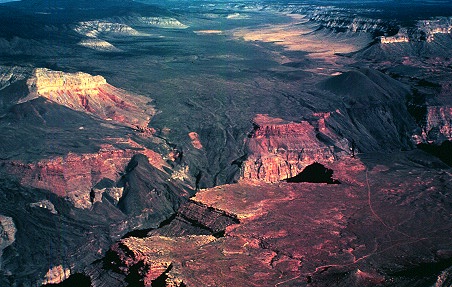 Lava cascades near Vulcan's Throne. View is to the northeast. The lava was erupted from a vent on the Uinkaret Plateau (not in the photo). The flows crossed the Esplanade Platform and cascaded into the inner gorge. The cascades are almost 3,000 feet (900 m) high. They cap remnants of old lava dams that form vertical cliffs as high as 600 feet (180 m) above the Colorado River. 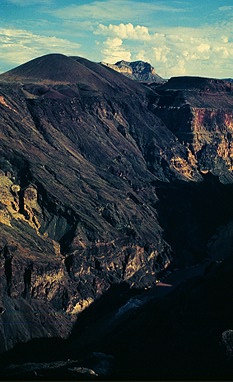 Vulcan's Throne, a cinder cone, formed on the remnants of two older cones. 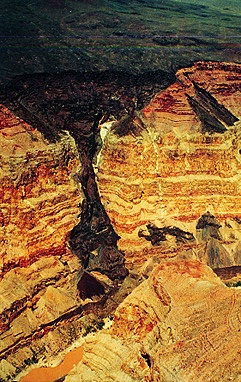 Devils Ramp is a lava cascade near Mile 184.8. The flows on the Esplanade Platform are not part of the cascade. Lower flows, which probably moved down a tributary, spilled into the inner gorge. Erosion has removed the top of the ramp to form the cliff. It least four major lava flows cascaded down the ramp and into the Colorado River. A few days to a few thousand years were required for the development of each dam. Lakes filled behind the dam in only a matter of years. Within several hundred years the lake filled with sediment. Erosion by waterfalls could have destroyed individuals dams in less than 20,000 years.

In the last 2 million years, more than 150 lava flows have poured into the Grand canyon. These flows formed 13 major lava dams that ranged in height from 200 feet (60 m) to 2,000 feet (600 m) in height. The largest dam impounded a lake that was more than 2,000 feet (600 m) deep and had a shoreline near the base of the Redwall Limestone. Two lakes were so large that they extended into Utah and beyond the present shoreline of Lake Powell. Most of the lava dams are less than 1.2 million years old.