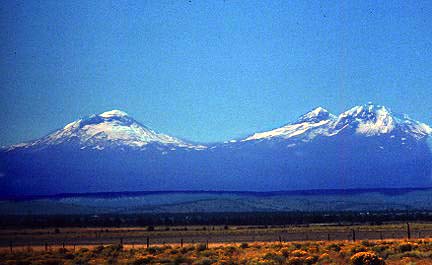 View of North and Middle Sisters (left and right, respectively) from the McKenzie Pass of the Oregon Cascades. Photo courtesy of the Oregon State Highway Department.

Collier Cone, a cinder cone, at the north base of North Sister. Photo courtesy of the Oregon Department of Geology and Mineral Industries.

North Sister is a shield volcano made of basaltic andesite. The shield is about 5 miles (8 km) in diameter. The summit cone is made of cinders, lava flows, dikes, sills, and a central plug. The flanks of North Sister have been cut by Pleistocene and Holocene glaciers.

South Sister started erupting as activity waned at Middle Sister . South Sister is the youngest of the Three Sisters. A summit crater was formed by a late Pleistocene eruption. The main cone is made of andesite, dacite, and rhyodacite. The most recent eruption was about 1,900 years ago. Glaciers carved cirques in the volcano but did not remove the summit crater.

Close-up of lava flow near Sparks Lake. Note glassy nature of lava and the presence of flow banding. Photograph by Steve Mattox, August 1987.

Additional information about Three Sisters is presented on the Cascade Volcano Observatory homepage of the U.S. Geological Survey.

View of Rock Mesa on the southwest flank of South. Rock Mesa is a rhyodacite dome. Broken Top is in the left background. Photo courtesy of the Oregon Department of Geology and Mineral Industries. Special thanks to Rosemary Kenney. 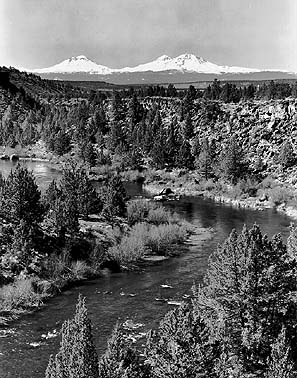 Looking west across the Deschutes River to the Three Sisters from near Redmond, central Oregon. Photo courtesy of the Oregon State Highway Department.

Uplifting is still ongoing at South Sister. On March 23 activity increased in the NE quadrant of the uplifting area: a 48-hour long period of seismic swarm, with more than 300 volcano-tectonic earthquakes (< M 1.9), was recorded.

On 8 May, the USGS Cascades Volcano Observatory detected a slight uplift of the ground surface over a broad area 5 km W of the South Sister volcano. The uplift may reflect the intrusion of a small volume of magma at ~7 km beneath the ground surface. CVO reported that if the intrusion of magma continues it could over time result in a volcanic eruption. However, there is no precursory activity that suggests an eruption is imminent.