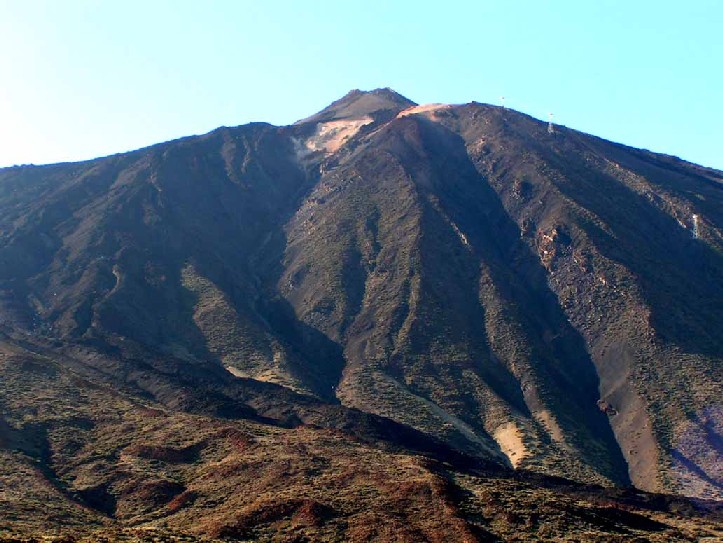 Teide is a stratovolcano capped by the Las Canadas caldera. The caldera is 7-12 miles (12-20 km) in diameter and partial filled by Montana Blanca, Pico Viejo (which has a large explosion crater), and Pico de Teide. Pico de Teide and other vents of Teide have erupted several times since the island was settled in 1402. The most recent eruption was in 1909. It lasted only ten days, producing lava flows that caused some damage. 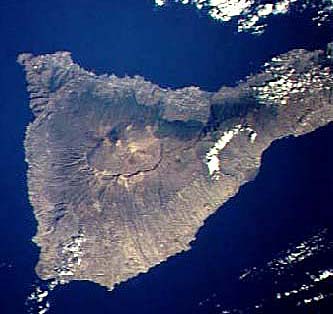 Click here for info on the Teide volcano on Tenerife Island 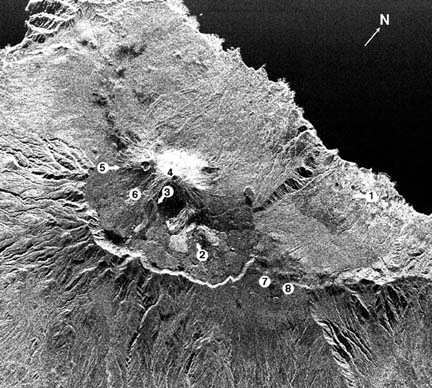 The Space Shuttle radar experiment called SIR-C/X-SAR, which flew in October 1994, collected this radar image of Piton del Teide using 5.6 cm (C-Band) and horizontally-transmitted, vertically-received (C-HV) measurements. Areas that are topographically rough or scarps that face the radar are bright in this image. The different numbers mark the locations of the other images presented here and, where given, the arrows show the direction that we are looking.

The northern segment of Teide has experienced several major slumps into the ocean during the past. Looking up from the coast towards the summit of the volcano, one can see the major scarp that forms the edge of the Tigaiga Block.

Driving up to the volcano, one of the first view that one gets of the complete cone is quite spectacular, since one can see many of the relatively young flows on the southern flank. The summit of the volcano rises to an elevation of 3,715 meters.

Unlike some high volcanoes, it is easy to get to the summit of Teide as there is a cable car that takes you from the caldera floor almost to the summit! From this vantage point, one can look south towards the remnants of an old caldera wall (center) that has now been surrounded by younger lava flows.