Tangkubanparahu is an active stratovolcano within the Sunda Caldera, west Java. Tangkubanparahu has erupted about seventeen times since 1826. The city of Bandung, population 1.6 million, is 18 miles (30 km) south of the volcano. This photograph shows Ratu fumarole field and crater. The most recent activity at this vent was a small phreatic eruption in 1983. Photograph by John Dvorak, U.S. Geological Survey, March 16, 1982. 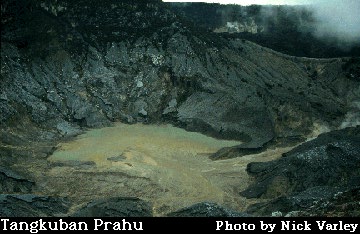 A view into the crater of Tangkubanparahu. Copyrighted photo by Nick Varley. 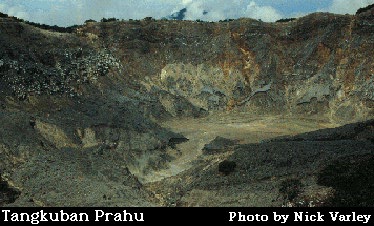 Another view into the crater of Tangkubanparahu. Copyrighted photo by Nick Varley.

Seismicity has been dominated by volcanic events from Sept. 9 - Oct. 6. Thin ash plumes rose 2.5 km above the volcano. The volcano remained at alert level 2.

Following the increase of seimic activity and temperatures of Domas and Ratu craters in the last two weeks (2-4°C increase) , the Alert Level was increased to 2 (on scale 1-4). No changes were observed on the volcano surface, but several animals were found dead in the crater.