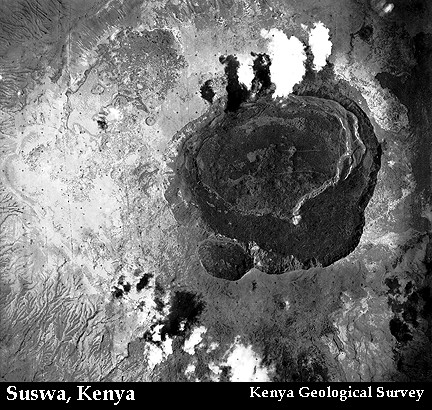 This volcano, also known as Ol Doinyo Nyukie (The Red Mountain), is situated in the middle of the Kenya Rift Valley about 35 km to the south of Lake Naivasha.

This is a photo of Suswa's crater rim

During the past 3 to 5 million years, faulting occured in this region and was renewed within the last million years. Suswa along with other local volcanoes such as Longonot and Menengai also erupted during this time period .

Over time a 10 km (6 mile) wide caldera was formed along with a subsidiary stratovolcano in its southern quadrant. The northern portion of Suswa subsided and a new circular crater was formed. This volcano has not erupted in historic geological time but maybe within the last 10,000 years.