Sunset Crater is in the eastern part of the San Francisco volcanic field. Sunset Crater, one of the youngest scoria cones in the contiguous United States, began erupting between the growing seasons of 1064 and 1065 A.D. Eruptions continued in the area for many decades. The cone was named by John Wesley Powell, first director of the U.S. Geological Survey, for the topmost cap of oxidized, red spatter which makes it appear bathed in the light of the sunset. The red, pink, and yellow colors at the top of the cone are silica, gypsum, and iron oxide that formed from fumaroles. 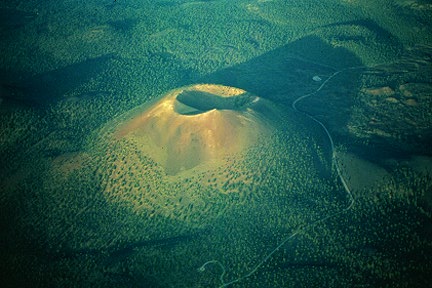 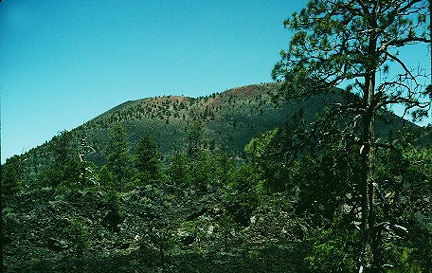 Sunset Crater is a nearly symmetrical cone made of dark-gray scoria and scattered bombs. The cone is about 1,000 feet (300 m) high and 1 mile (1.6 km) in base diameter. 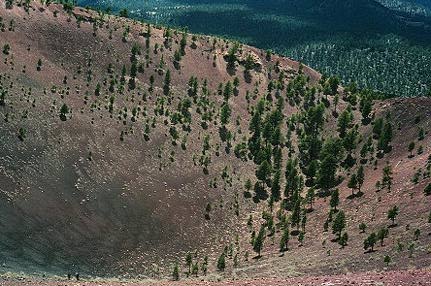 The main crater at the summit is 400 feet (120 m) in diameter. Photograph courtesy of the National Park Service.

The eruption at Sunset Crater covered and area of 800 square miles (2,100 square kilometers) with lapilli and ash. The eruption was Strombolian in style and large, with eruption columns as high as several hundred feet (meters). The tephra covers parts on the Bonito and Kana-a lava flows which were erupted from Sunset Crater. The Bonito lava flow erupted from the west and northwest base of the cone and covered an area of 1.8 square miles (4.6 square kilometers). The Kana-a lava flow was erupted from the base of the east side of the cone and traveled 6 miles (9.6 km) down a wash. 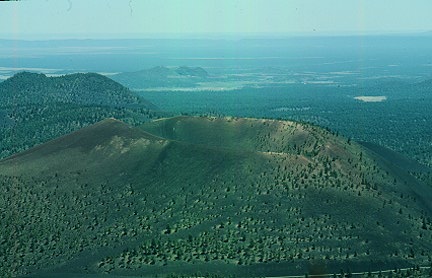 The Sunset eruption is unusual because the volume of volcanic products (about 0.7 cubic miles, 3 cubic km) is large for a strombolian event, the air fall dispersal was large, and the discharge rate for magma was high.

The Sunset event had a severe effect on the Sinagua Indians that lived in the area, forcing them to temporarily leave. 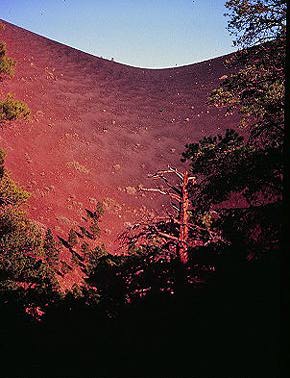 Inside the main crater of Sunset Crater. Photography courtesy of National Park Service.

In the 1920s, H.S. Colton saved the cone from severe damage by averting the attempt of a Hollywood movie company to blow it up in order to simulate an eruption. This led to the establishment of the Sunset Crater National Monument. 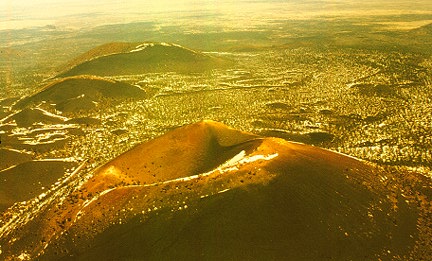 Thanks to Dana Harper of the National Park Service and Wendell Duffield of the U.S. Geological Survey for providing photographs.