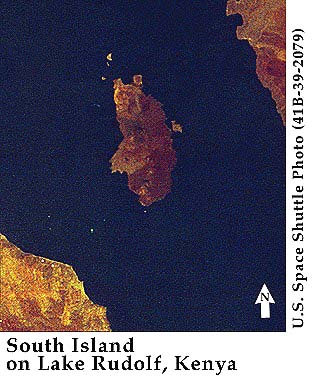 South Island - sometimes known as Hohnel Island - is located in Lake Rudolf (now called Lake Turkana) in northern Kenya. This volcanic island is made up of a central ridge of ash cones that run in a north-south direction. Some of these cones reach an elevation of 1,050 ft. (~ 320 m) above the lake is 114 m deep (375 ft), so the South Island volcanic complex is about 430 m (1400 ft) high. From north to south the island measures around eight miles (~12 Km) and about three miles (~5 Km) east to west. Members of a 1888 German expedition to Lake Turkana apparently witnessed a small eruption of South Island, although it may have simply been steaming of sulfur-rich gases. 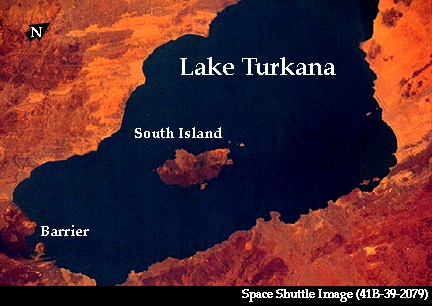 Dunkley, PN and others, 1993, The geothermal activity and geology of the northern sector of the Kenya Rift Valley: British Geological Survey, Res. Rpt SC/93/1, p 118.