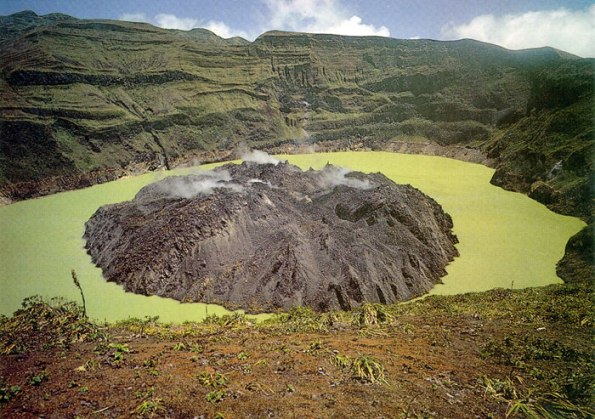 Soufriere of the island of St. Vincent is about 180 miles (300 km) south of the volcano with the same name on Guadeloupe. However, Soufriere on St. Vincent is a far more dangerous volcano. Soufriere St. Vincent is the northernmost and youngest volcano on St. Vincent Island. The 1.6-km wide summit crater, whose NE rim is cut by a crater formed in 1812, lies on the SW margin of the 2.2-km-wide Somma crater, which is breached widely to the SW as a result of slope failure.

Of the broad region known as the West Indies, only the Lesser Antilles, an arc of small islands formed by subduction of oceanic crust moving westward from the Mid-Atlantic Ridge, are volcanically active. ... The northern islands were discovered by Columbus on his second voyage, in 1493, and other islands on his third in 1498, but they were passed over by settlers preferring the Greater Antilles to the west.
Image Credit: Smithsonian Institution Global Volcanism Program Website, 2003, from Simkin and Siebert, 1994

The first historical eruption of the volcano took place during 1718; it and the 1812 eruption produced major explosions. Much of the northern end of the island was devastated by a major eruption in 1902 that coincided with the catastrophic Mont Pelée eruption on Martinique. A lava dome was emplaced in the summit crater in 1971 during a strictly effusive eruption, forming an island in a lake that filled the crater prior to an eruption in 1979. The lake was then largely ejected during a series of explosive eruptions, and the dome was replaced with another. 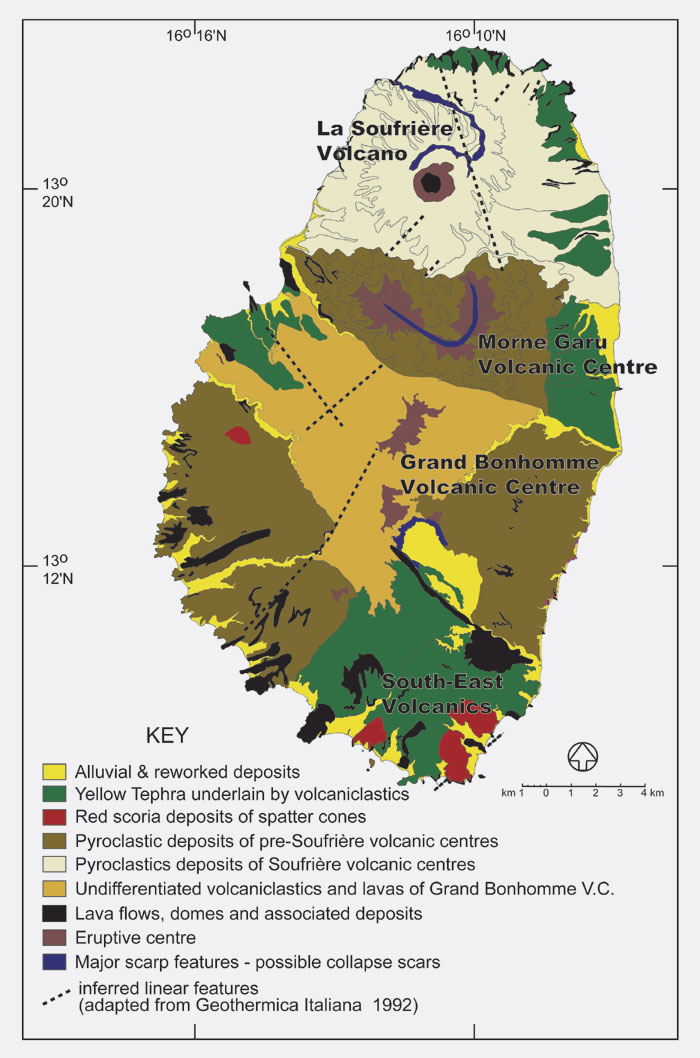 It is a stratovolcano with a crater lake. Violent eruption occurred in 1718, 1812, and 1902. The 1902 eruption killed 1,600 people. There were also eruptions in 1971-1972 and 1979. The 1979 eruption started with less than 24 hours of precursor activity. The first episode lasted less than two weeks. It was vulcanian in character and sent steam and tephra as high as 12 miles (20 km). The second episode consisted of the quiet extrusion of a basaltic andesite lava dome. People were successfully evacuated and there were no fatalities. Fiske (1984) described the scientific response to this crisis. Photograph by Richard Fiske, April 22, 1979. The column is about 4 miles (6 km) tall. Photo courtesy of the U.S. Geological Survey.

Robertson, R.E.A. 2003. The Volcanic Geology of the Pre-Soufriere rocks of St. Vincent, West Indies. PhD, Department of Geography and Geology, University of the West Indies, Mona.