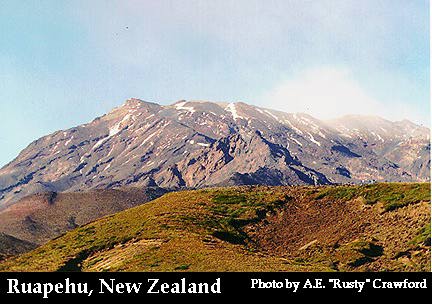 Ruapehu, the tallest mountain on the North Island, is a massive andesite stratovolcano. The currently active vent is an acidic crater lake near its summit. The volcano has a volume of 110 cubic km and the surrounding ring plain has a similar volume. Photo is looking south across the flank of Ngauruhoe to the September, 27, 1995 eruption of Ruapehu. Photo courtesy of Thor Thordarson. 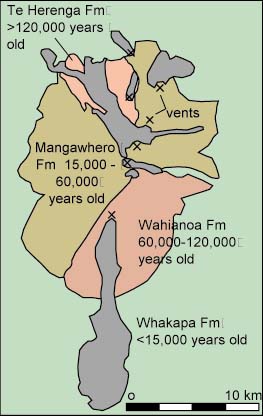 Simplified geologic map of Ruapehu. The volcano began to form more than 120,000 years ago. The Te Herenga Formation is made of lava flows, breccia, plugs, and dikes. It is exposed on the northwest side of the mountain. The Wahianoa Formation is made of lava flows, breccia, and lahars and is exposed on the southeast side of Ruapehu. The Mangawhero Formation form the resent-day high peaks and main cones of Ruapehu. The formation consists of lava and pyroclastic deposits. The Whakapapa Formation is mostly younger than the most recent glacial period (about 15,000 years ago) and is made of block lavas, breccias, and pyroclastic material that erupted from 6 vents. Crosses show the locations of vents active in the last 50,000 years. From Cole (1990). 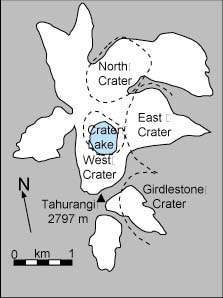 Summit area of Ruapehu. Water from Ruapehu feeds four major rivers. Six glaciers flow down the mountain to elevations as low as 2,000 m. From Nairn and Cole (1975).

Cronin and Neall (1997) summarized the eruptive history of Ruapehu for the last 75,000 years: 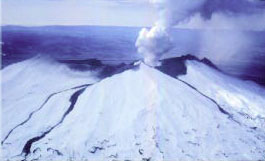 Lahar deposit from the September, 1995 Ruapehu eruption. Note the abundance of ice in the lahar. Photo courtesy of Thor Thordarson.

Lahars have been common throughout Ruapehu's history. On the northeast ringplain of the volcano there are 15 distinct lahar deposits ranging in age from greater than 65,000 years to 5,000 years in age. The most active periods of lahar deposition correspond to cool and stormy climatic conditions about 75,000 to 65,000 years ago and 23,000 to 14,000 years ago. These cooler climates allowed the growth of glaciers which, in turn, helped supply more sediment to lahars. Lahars distribution has been influenced by a large lava flow (22,500 years old) and by younger (less than 15,000 years ago) glacial moraines. These barriers continue to direct lahars on the northeast side of Ruaphu into the Whangaehu and Mangatoetoenui catchments (Cronin and Neall, 1997).

Recent historic eruptions at Ruapehu are described in Houghton, and others (1994). They include:

Other Images of Ruapehu