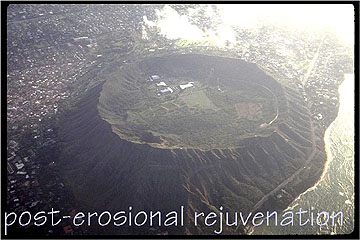 After anywhere from 500,000 to 3 million years of inactivity, some Hawaiian volcanoes become reactivated. This is after erosion has greatly altered the original form of the volcano. The best examples of this rejuvenation stage (sometimes called the post-erosional stage) are found on the Ko'olau and East Maui volcanoes. Ko'olau volcano makes up the eastern half of O'ahu. 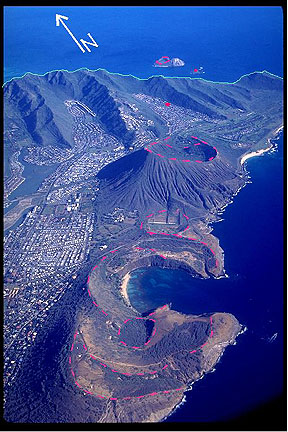 Air photo to the right is of the Koko rift section of O'ahu (the E and of Ko'olau volcano). This prominent line of vents built up after erosion had carved deep valleys into this southeastern end of the Ko'olau volcano. The dashed pink lines mark the rims of phreatomagmatic craters, and the two pink dots mark non-phreatomagmatic "dry" vents. The green line is the crest of the Ko'olau mountains, which in this part of the volcano, roughly marks the top of the giant landslide scarp. Hanauma Bay is obvious with its white sand beach, Koko Crater is the tallest cone, and Manana Island marks the northeast end of the rift.

The other fine example is the East Maui volcano, commonly (but incorrectly) called Haleakala. The "crater" at the summit (which is properly called Haleakala) actually formed from the coalescence of two very large valleys that in the 400,000 years after the cessation of the post-shield alkalic stage, were able to eat out the heart of the volcano. After this long eruptive repose the rejuvenation stage filled these valleys with lava flows and cinder cones, providing the spectacular scenery found today.

The lava erupted in these rejuvenation-stage eruptions is highly alkalic and geochemically indicates that it came from a great depth (Chen & Frey 1983); a few of the deposits contain garnet-bearing xenoliths. These are indicative of a rapid and violent journey from the zone of magma generation. The volume contribution from these rejuvenation-stage volcanics is <<1% of the total for a Hawaiian volcano, and they form monogenetic fields - each vent only erupting once. Like monogenetic fields elsewhere in the world the overall eruption rate during this stage is very small (Walker 1990).

It is not known why this stage of volcanism occurs. There have been numerous explanations put forth, the most popular one today suggests that the lithosphere rebounds upward after having been depressed while directly over the hotspot. This rebounding is because the lithosphere is no longer being thermally weakened and because the overlying volcanoes are eroding. Depressurization due to this uplift would then lead to melting and magma generation. It is not clear that the lithosphere does indeed rebound in that way, however. Perhaps batches of magma attempt to make it to the surface all over under the Pacific plate, and only where the plate has been fractured and weakened by hotspot volcano formation are they able to make it to the surface. On the Ko'olau volcano, many of the rejuvenation stage vents are found to lie along rifts that are perpendicular to the trend of the old Ko'olau volcanic structure. Many of the Honolulu volcanic series vents happened to erupt into shallow seawater, and the eruptions were phreatomagmatic.