Usually we think of volcanoes as single mountains with a crater at the top. The Pinacates (the name means stink bug!) are a 30 mile wide volcanic field with many separate small volcanoes, rather than one giant volcano. Most of the round dark spots are cinder cones, and the six larger circles (many with bright sand on their floors) are a special kind of volcanic crater called maars. A maar form when a rising column of magma contacts water, causing a big steam explosion. Maar is German word for sea. Many maar volcanoes exist in Germany, where the rainy weather causes them to be filled with water - thus they are small seas.

The Pinacates are mostly in Mexico, but the Arizona border cuts diagonally across the top of the volcanic field. Can you see the thin line there which is a road? 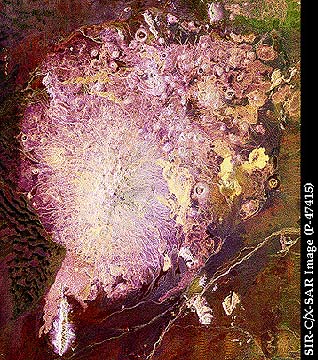 This SIR-C/X-SAR radar image shows the Pinacate Volcanic Field in the state of Sonora, Mexico. Over 300 volcanic vents occur in the Pinacate field. The larger circular craters seen in the image are a type of volcano known as a "maarÓ, which erupts violently when rising magma encounters ground water, producing highly pressurized steam causing powerful explosive eruptions. The highest elevations in the volcanic field, about 1200 meters (4000 feet), occur in the "shield volcano" structure shown in bright white, occupying most of the left half of the image. Numerous cinder cones dot the flanks of the shield. The yellow patches to the right of center are newer, rough-textured lava flows that strongly reflect the long wavelength radar signals. Along the left edge of the image are sand dunes of the Gran Desierto. The dark areas are smooth sand and the brighter brown and purple areas have vegetation on the surface.