Pavlof (55.42N, 161.90W) and Pavlof Sister (55.45N, 161.95W) are a pair of symmetrical stratovolcanoes on the Alaska Peninsula. Pavlof is probably the most consistently active volcano in the Aleutian arc, with nearly 40 eruptions since 1790. Eruptions are typically Strombolian. A 1928 expedition to Pavlof was directed by Dr. Thomas Jaggar, founder of the Hawaiian Volcano Observatory. Pavlof Sister is less active, with a single eruption from 1762-1786. In the above photograph Pavlof Sister is on the left and Pavlof on the right (date and photographer unknown). 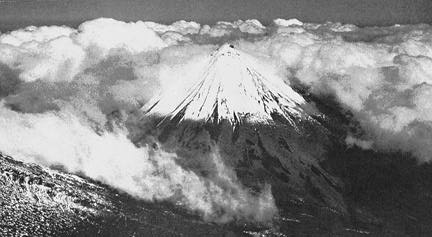