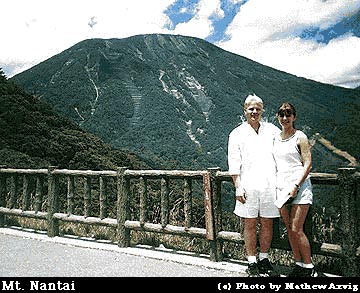 Former VolcanoWorld employee, Matthew Axvig, and his wife Natasha with Mt. Nantai in the background.

The mountainous region in which Nantai lies is on the island of Honshu, about 75 mi (120 km) north of Tokyo. This area is home to the city of Nikko (pop. ~30,000), along with many temples, shrines, sanctuaries, and a sacred bridge. Saint Shodo was the first person to climb Mt. Nantai in 782. In 784, he founded Chuzhen Temple. He also built Shihonryuji Temple and Honku Shrine in the city of Nikko. The combination of the natural beauty of the area and the beauty of the shrines and temples led to Nikko becoming Japan's first national park in 1934. 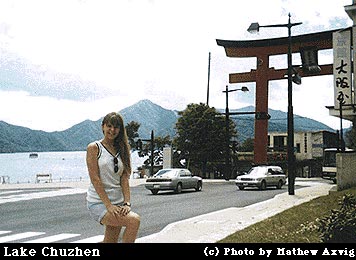 Natasha with Lake Chuzhen in the background at the base of Mt. Nantai. 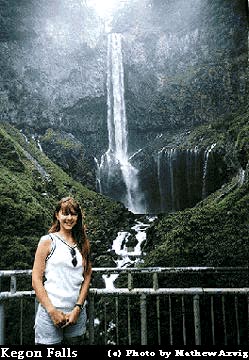 Kegon Falls is one of the most famous and powerfull waterfalls in Japan. It drops 318 ft (97 m) from Lake Chuzhen to the rocks below. The falls are about 23 ft (7 m) wide at the base where they form a 16.5 ft (5 m) deep pool. The falls were formed when the Daiya River was rerouted by lava flows. Twelve small waterfalls are situated behind and to the sides of Kegon Falls. They leak through the many cracks between the lava flow and the mountain.