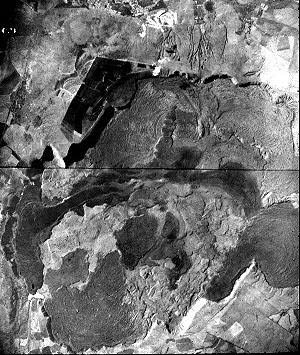 This black and white picture is a mosaic of two airphotos showing the general geology and the roughness of different lava flows on the caldera's floor. Menengai consists of a caldera located on a shield volcano in the Kenya Rift Valley. The roughly 5 mile (8 km) wide caldera is complex in outline, suggesting that there were different periods of collapse for each part. There are remains of small cinder cones on the floor of the caldera; some showing fumarole activity. Lavas fill much of the caldera and push up against the inside of the rim. Menengai has obviously erupted many times but only one eruption has been dated at about only 7,350 years ago. 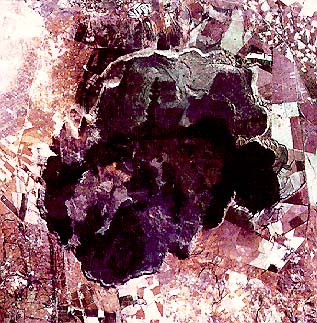 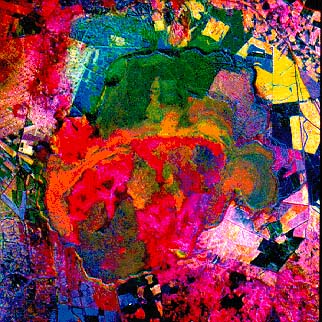 The reds represent older lavas that have been partly covered by vegetation, and the yellowish browns are the youngest lava flows.

The Landsat TM images were processed by Herbert Blodgett of NASA Goddard Space Flight Center. The air photos are from the Geologic Survey of Kenya.